Venezuela concerned about resurgence of conflict in Colombia 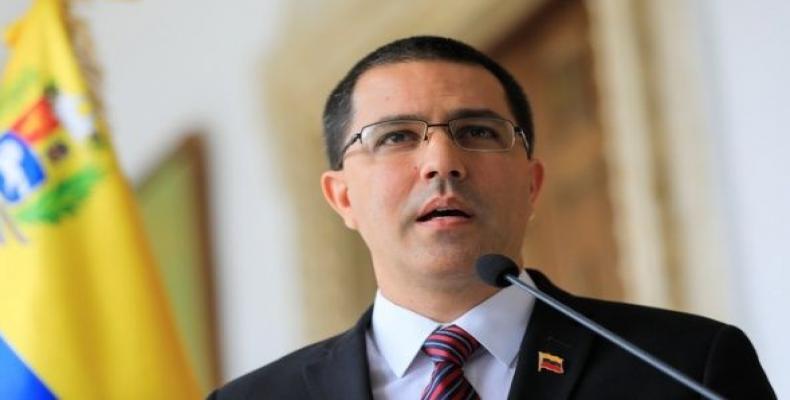 Caracas, August 30 (RHC)-- Venezuela's Foreign Minister Jorge Arreaza said on Friday that his government is concerned about the imminent resurgence of the armed conflict in Colombia, a prospect which could happen due to the rearmament of a sector of the Revolutionary Armed Forces of Colombia (FARC-EP) despite the 2016 Peace Agreement.

"Venezuela is following with concern the imminent reactivation of the armed conflict between the Colombian government and a fraction of the FARC," Arreaza said.  And he announced that his government is in consultations with the peace agreement guarantor countries "so that the parties resume contacts."

At a news conference held in Caracas, the foreign minister rejected Colombian President Ivan Duque's recent statements, which seemed to put all responsibility on third party countries for the events raised in his Colombia.

“Venezuela rejects the impudence of Ivan Duque by moving his exclusive responsibility towards third countries and third parties in the planned dismantling of the Peace processes and the breach of the commitments assumed."  He added that Duque's attitude "not only jeopardizes the normalization of public life in Colombia but also threatens regional peace and security in South America."

The Venezuelan foreign minister also indicated that the announcement made by a sector of the FARC represents a threat against the stability of the peace agreement and urged the parties to make efforts to avoid the selective killings of social leaders.  "The Bolivarian Government urges the actors who led the peace agreements to exhaust all efforts to avoid further suffering of the civilian population."

Finally, Arreaza ratified his government's willingness to lend its help to the Colombian people so that it can overcome an armed conflict which has been taking place continuously since the 1960s.  "Venezuela will always be at the service of the Colombian people to cooperate in the immense challenge of generating the conditions that allow achieving the real and lasting peace that the Colombian society deserves and desires, after decades of bloodshed, violence and pain."

These statements occurred at a time when the Colombian armed conflict had generated 8,874,110 "registered" victims so far, according to the National System of Attention and Reparation for Victims (SNARIV).