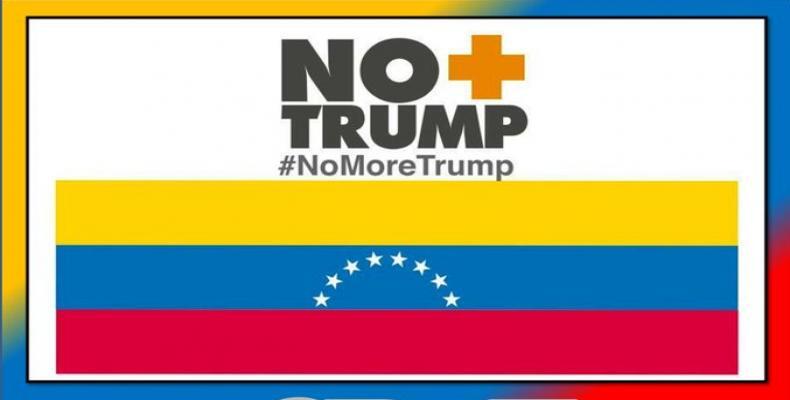 Caracas, August 31 (RHC)-- Venezuela President Nicolas Maduro announced that the #NoMoreTrump (#NoMasTrump) petition is halfway to its goal of 10 million signatures that will be sent to the U.N. general secretary next month.

President Nicolas Maduro said that once at least 10 million people have signed, all petitions circulating the globe will be sent to the United Nations in September, just in time for the 74th UN General Assembly set to begin the 17th.

During a speech in Miranda, the Bolivarian leader highlighted the massive participation of citizens in Venezuela and around in the campaign to get rid of the total and illegal U.S. blockade, which began August 10 and will end September 10.

"We set a goal of 10 million and I am sure that we will reach it to tell imperialism ‘enough  aggression against Venezuela,’ " said the president.

The U.S. administration under Trump has placed a slew of economic sanctions on Venezuela since entering office in 2016. The tactic culminated on August 5 when Trump issued a decree for a full economic and commercial blockade on the country.

“All property and interests in property of the Government of Venezuela that are in the United States ... are blocked and may not be transferred, paid, exported, withdrawn, or otherwise dealt in,” the executive order reads.

Members of the European Union along with China, Russia and Cuba continue to reject the measure.  And the #NoMoreTrump campaign has spread to Germany, Bolivia, Brazil, Bulgaria, Egypt, Portugal, China, Russia, Namibia, France, Cuba, South Africa, Syria, among others where signatures are being collected.