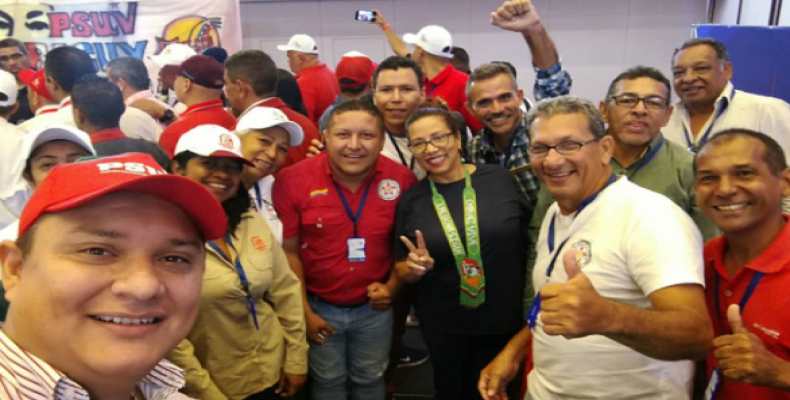 Caracas, September 1 (RHC)-- The Vice President of the Working Class of the United Socialist Party of Venezuela (PSUV) Francisco Torrealba gave a closing speech Saturday at the 1st International Meeting of Workers in Solidarity with Venezuela and the Bolivarian Revolution held in Caracas over the past week.

"We hope to continue to count on all the willingness you have always had to support the cause of the Venezuelan people," Torrealba said during his speech.   Torrealba also called on those present to participate in the second meeting to be held next November in Havana.  He invited those present at the event to participate in the Great International Anti-Imperialist March also being held on Saturday in Caracas.

"Our president, Nicolas Maduro is making sure our voices are heard.  President Maduro is very happy every time someone from another country visits us because this allows them to form their own ideas about what is happening in our country," Torrealba told the delegates in attendance.

The meeting was attended by more than 800 international and 64 national workers' representatives in support of the Venezuelan people and in rejection of the coercive measures that the United States has been carrying out against the South American nation.

The PSUV vice president emphasized that the "workers will continue supporting President Nicolas Maduro because Venezuela will never again be anyone’s backyard."

The closing event was also a scenario in which Venezuela denounced the U.S. "that is determined to end the revolutionary process for the simple fact that [Venezuela] is not aligned to its political interests in the region."

The meeting was officially closed after Mexican delegate, Gabriela Santos read the group’s Final Declaration that urges Lima Group and the U.S. to respect Venezuela’s sovereignty.  "We demand respect for the sovereignty of the Bolivarian Republic of Venezuela and we ratify the resolute support of the Bolivarian Revolution. We support the effort of the legitimate president, Nicolas Maduro to maintain peace in the South American nation," the document reads.

The declaration also rejected the militarization of Latin American and Caribbean countries by NATO nations.  The meeting led to a series of agreements that include holding an annual meeting of workers that will have its headquarters in the Venezuela.