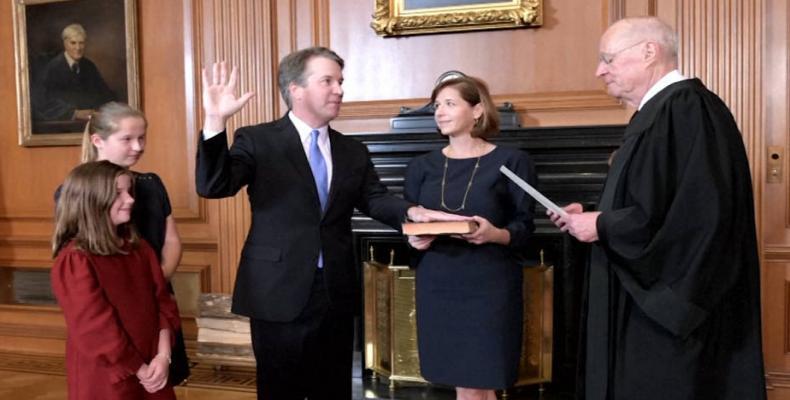 Washington, September 17 (RHC)-- In the U.S., calls are mounting to impeach Supreme Court Justice Brett Kavanaugh after new evidence and new allegations of sexual misconduct were reported by The New York Times.

Deborah Ramirez, a former Yale classmate, accused Kavanaugh of pulling down his pants and thrusting his penis at her during a drunken party, forcing her to touch it while she swatted it away from her.  Kavanaugh denied the accusation during his confirmation hearings, but The New York Times found at least seven people — including Ramirez’s mother — knew of the incident for years; some had learned of it in the days after it happened.

The Times also uncovered another similar incident in which Kavanaugh’s friends pushed his penis into the hand of a female student at another party.  The FBI never followed up on a list of 25 people provided by Ramirez who could corroborate her story, nor did they follow up on information about the second incident.

In a historic congressional testimony last September, Dr. Christine Blasey Ford accused Brett Kavanaugh of attempting to rape her when she 15 and he was 17.  Multiple 2020 Democrats are calling for Kavanaugh’s impeachment in light of the reports, including Senators Bernie Sanders, Elizabeth Warren, Kamala Harris and former San Antonio mayor and housing secretary, Julián Castro.