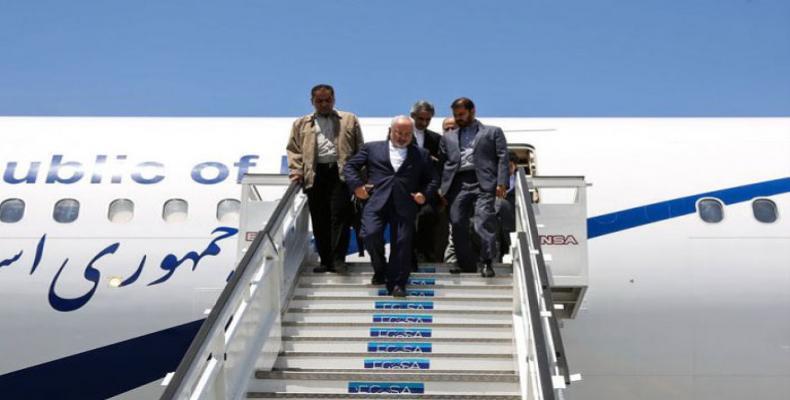 New York, September 21 (RHC)-- Iran’s Foreign Minister Mohammad Javad Zarif arrived in New York on Friday ahead of the 74th session of the United Nations General Assembly.  Speaking to reporters upon his arrival, Zarif called the annual gathering of world leaders a good opportunity to meet with his counterparts and other officials.

Earlier in the day, the Trump administration announced it was imposing sanctions on Iran’s Central Bank at the “highest level.”  Iran’s Foreign Minister described the US as addicted to sanctions that target Iranian people.  He said the U.S. has been using sanctions for the past 40 years to no avail as it hasn’t given them the type of outcome they’re looking for.

Zarif called on the U.S. to reconsider its policies with a “sober reassessment of what they have achieved through pressure on Iran”. The Iranian diplomat also called for cooperation among regional countries to achieve security in the Persian Gulf.

Iran’s Foreign Minister said that there will be a 4+1 meeting of the joint commission of the nuclear accord at the ministerial level on Wednesday and that he will meet with the European members of the nuclear deal individually as well.

Meanwhile, Iran’s President Hassan Rouhani is expected to arrive in New York on Monday and will deliver his speech to the UN General Assembly later in the week.

Iran’s Foreign Minister is scheduled to meet with his British, French and Ommani counterparts on the sidelines of the 74th annual United Nations General Assembly in New York.  He will also accompany Iran’s President in meeting world leaders.