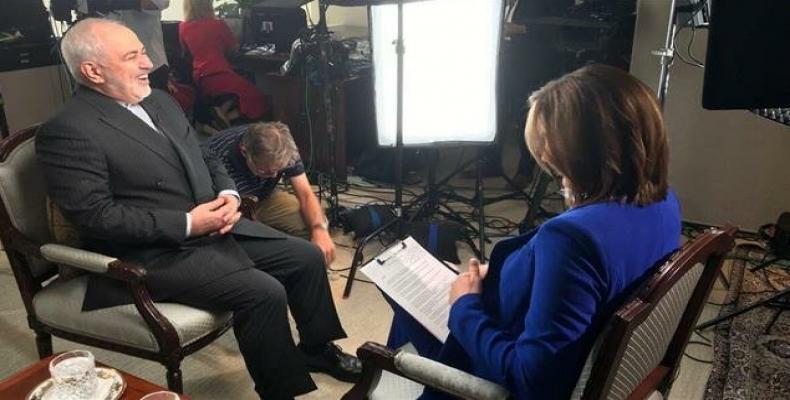 New York, September 21 (RHC)-- Iranian Foreign Minister Mohammad Javad Zarif has warned that any country launching a war against Iran would not be able to end it on its own, warning that such a military action would have dire consequences for the entire Middle East and beyond the region.

In an interview to the CBS News’ Face the Nation program, Zarif said a war with Iran would not be necessarily limited to the Iranian borders.  He said that Iran would never seek to initiate a war, but warned that any one launching a war against Iran would not be the one that ends it.

The remarks, recorded in Iran’s United Nations Mission in New York, are the latest to come from Iranian officials amid an escalation in tensions in the Middle East, where the United States has sought to accuse Iran of attacks on oil installations east of Saudi Arabia on September 14th.

Iran has denied any role in the attacks which have been claimed by Yemen’s ruling Houthi Ansarullah movement.  The attacks seriously affected Saudi Arabia’s oil production and sent shockwaves across the global markets.

In his remarks, Zarif described as a mere gesture a U.S. decision to reinforce troops in the Persian Gulf following the attacks in Saudi Arabia, saying such moves would not help deescalate the situation in the region.  He called on Washington and its allies to look for a solution to the war in Yemen, saying that would be a “helpful” solution.

In his interview to CBS’s Margaret Brennan, Zarif rejected claims that Washington was willing to launch a dialogue with Iran, saying the American visa issued for him to attend a UN General Assembly meeting came with a waiver granted by U.S. authorities.

They wanted to remind me that I should not be here, Zarif told Brennan, making a reference to the fact that he is under American sanctions.

Earlier in the day, the top Iranian diplomat criticized Washington for its new wave of sanctions on banking and financial institutions in Iran, saying the bans, which came following attacks on Saudi Arabia, were an attempt out of desperation which sought to bar the access of ordinary Iranians to food and medicine.

“But this is dangerous and unacceptable as an attempt at blocking ... the Iranian people’s access to food and medicine,” said Zarif a day after the US announced sanctions on Iran’s central bank and the country’s sovereign wealth fund.

Iran's Foreign Minister Zarif says as confirmed by former US secretary of state Tillerson, the B-Team wants to take the US military as its own personal mercenary.

The Iranian minister is expected to have a busy schedule in New York where he plans to meet foreign ministers of countries signatory to a major international agreement on Iran’s nuclear program which has suffered since May last year when the U.S. withdrew from the pact.

Reports said Zarif had held a first ministerial meeting on Saturday with Yusuf bin Alawi, the foreign minister of Oman, a country in the Persian Gulf which acted as a mediator between Iran and the United States during talks that led to the 2015 nuclear agreement between Iran and world powers.