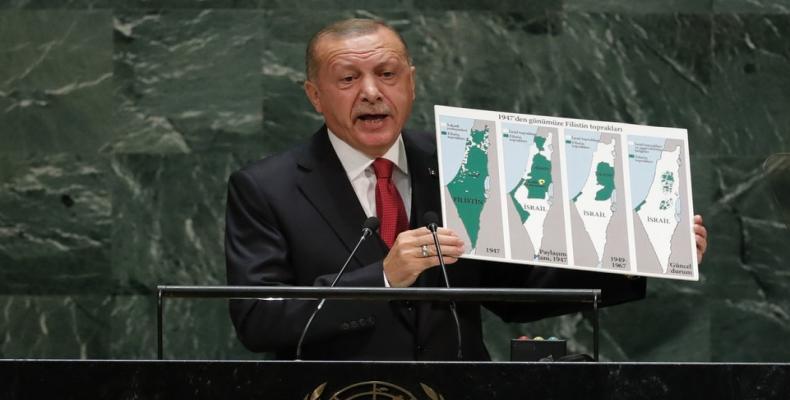 United Nations, September 26 (RHC)-- Speaking at the 74th session of the UNGA, Erdogan censured Israel’s unlawful expansionist polices in the occupied territories. He brandished a famous time-lased map showing facts and figures about a “shrinking” Palestine and the Zionist regime’s gradual encroachment on Palestinian land.

“The Palestinian territory under Israeli occupation has become one of the most striking places of injustice,” he told world leaders. “Israel, which was almost non-existent in 1947, has continued until this day to seize Palestinian land with the aim of eliminating the state.”  “How can the Golan Heights and the West Bank settlements be seized just like other occupied Palestinian territories before the eyes of the world? Is the aim of the initiative to promote, as the Deal of the Century, to entirely eliminate the presence of the state and the people of Palestine? Do you want bloodshed?" Erdogan asked.

The Turkish leader further censured Israel’s disregard of “human values” and international law, which is reflected in the regime’s “acts of aggression such as the inhuman blockade in Gaza, illegal settlements and attacks against the historical and legal status of Jerusalem (al-Quds).”  Erdogan went on to call for “the immediate establishment of an independent and homogeneous Palestinian state on the basis of the 1967 borders with East Jerusalem as its capital is the solution.”

By showing the maps, Erdogan was apparently mimicking Netanyahu, who has the habit of taking pictures and graphs to the UN to spread lies about Iran’s nuclear program.  The Israeli prime minister abuses the UN podium to repeat the baseless claim that Iran is seeking to develop nuclear weapons at clandestine sites.