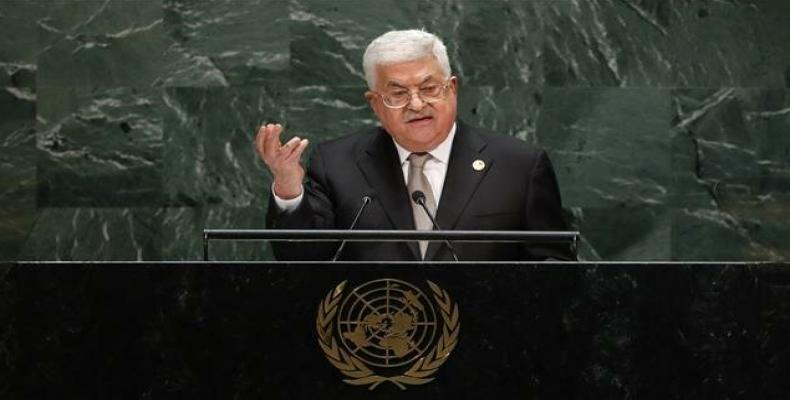 United Nations, September 26 (RHC)-- Palestinian President Mahmoud Abbas has called on the international community to assume its responsibilities and take an appropriate action aimed at putting an end to the Israeli regime’s continued acts of aggression against Palestinians.

“It is time for the international community to uphold its responsibilities to bring an end to this Israeli aggression and arrogance.  I had hoped to come to you this year to proclaim together the end of this occupation, the Israeli occupation of my homeland, Palestine.  But, regrettably, I stand before you today bearing the same miseries and pain that have been endured for so long by my people, who, despite all that they have suffered, still hold on to the hope of achieving their freedom and independence, like all other nations of the world,” Abbas said at the 74th session of the United Nations General Assembly in New York on Thursday.

And the Palestinean president added: “I ask you once again: Hasn’t the time come for the emancipation of the Palestinian people and their freedom from this injustice, oppression and occupation?”

Mahmoud Abbas went on to denounce Israeli Prime Minister Benjamin Netanyahu’s controversial pledge to annex the Jordan Valley and the adjacent northern Dead Sea in the occupied West Bank as illegal, underlining that the Palestinian Authority will terminate all its agreements with the Tel Aviv regime if Israel proceeds with such a plan.

“A week before the recent Israeli elections, Israel’s Prime Minister (Benjamin) Netanyahu came out to arrogantly announce that should he prevail in the election, he will annex and apply Israeli sovereignty to the Jordan Valley, northern Dead Sea, and Israel’s colonial settlements despite the fact that all these areas are occupied Palestinian territories. We reject entirely and completely this illegal plan,” Abbas said.

Abbas also slammed Washington’s support for Israel while denying Palestinians’ rights, noting that the United States has destroyed any possibility of peace and has jeopardized the so-called two-state solution with President Donald Trump’s controversial proposal for “peace” between the Israeli regime and Palestinians, dubbed “the Deal of the Century.”

The Palestinian president stressed that he will not accept any American mediation anymore due to Washington’s biased policies.  He also demanded the cessation of the U.S. role as the key player in the so-called Middle East peace process.