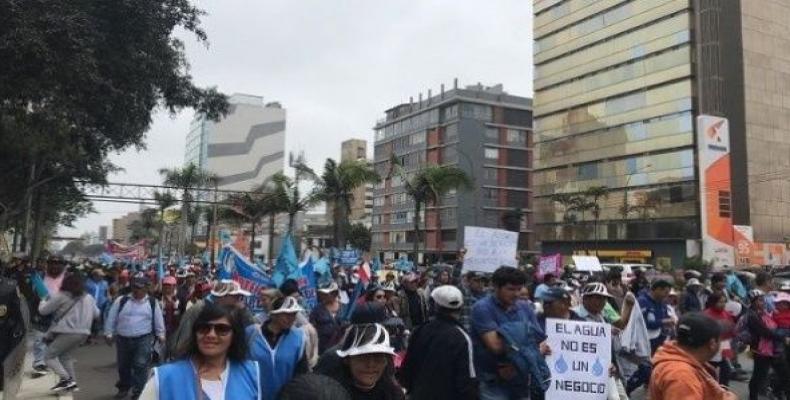 Lima, September 28 (RHC)-- Residents of Lima, Peru, marched against the privatization of the pubic Lima Drinking Water and Sewerage Service (Sedapal) as they headed towards the Ministry of Housing Construction and Sanitation.

The protesters demanded the Supreme Decree Number 214-2019-EF, a resolution that establishes that the state-controlled water institution be moved to the private sector.  The demonstration was organized by the Single Union of Workers (Sutesal) that says its open to dialogue and pacifist demonstrations against the privatization measure.

“Water is a right, not a privilege” was the motto that the hundreds of demonstrators shouted along Javier Prado Avenue in Peru's capital.

However, Housing Minister Miguel Estrada said that the administration has no plans to privatize Sedapal, on the contrary, it will invest more into the water agency to improve its service.

“The law allows it (privatization) but that's not part of our agenda. This government is not thinking of privatizing Sedapal, because is a public right and is our duty to give that service to the people.  We are doing investments to expand coverage in Lima,” explained the minister to crowds.