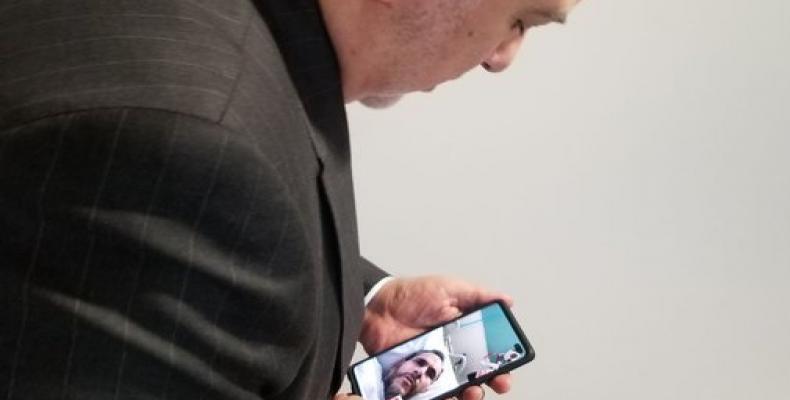 New York, September 30 (RHC)-- Iranian Foreign Minister Mohammad Javad Zarif was able to "visit" with Iran's Ambassador to the United Nations Majid Takht-Ravanchi, who is being treated for cancer in a hospital in New York.

After the U.S. denied his request to go to the hospital, the Iranian foreign minister employed the technology of cyberspace, seeing and talking with his colleague on the small screen of his cellphone.

The U.S. State Department prohibited Zarif from actually going to the hospital.  Due to U.S. sanctions and travel restrictions placed on Iran in July, the foreign minister can only travel between the John F. Kennedy airport and a limited area surrounding the UN building in New York where he is taking part in the 74th session of the United Nations General Assembly.

Travel restrictions targeting Iran’s top diplomat have also been imposed on other Iranian diplomats and their families in New York.  The measure, described as "basically inhuman" by Zarif, is part of a growing list of measures adopted by the Trump administration in a bid impose “maximum pressure” on Tehran.

The U.S. initiated its anti-Iran campaign principally by withdrawing from the multilateral Joint Comprehensive Plan of Action (JCPOA) last year and reimposing unilateral sanctions that had been lifted under the deal on Iran.

Speaking on his return from the UN General Assembly, Iranian President Hassan Rouhani said that European signatories of the deal -- Germany, Britain and France -- had insisted that a meeting between Iranian and American officials would lift “all sanctions against” Iran.

Rouhani, however, rejected the offer, arguing that true negotiations and talks could only take place if the “toxic atmosphere of maximum pressure” against Iran ceased to endure.