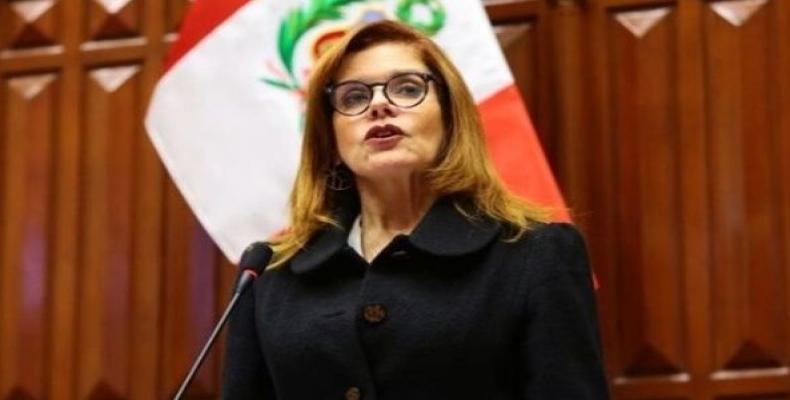 Lima, October 2 (RHC)-- Peruvian Interim President Mercedes Araoz announced her resignation Tuesday night as Vice President of the country and as head of state, a designation conferred by Congress on Monday.

“I believe that there are no minimum conditions to exercise the task given to me by the Congress of the Republic,” Araoz stated in a letter, adding that the reason for resigning is that “Constitutional order was broken” by President Martin Vizcarra’s decision to dissolve the same Congress that later appointed her as President.

On Tuesday, Peruvians woke up to find out that two people claimed the presidency, both Vizcarra and Araoz, but with the latter’s late-night decision the political crisis faced by the Latin American nation seems to wind down for the moment.

"I have decided to irrevocably resign as Constitutional Vice President of the Republic. The reasons are explained in the attached letter. I hope that my resignation will lead to the convening of general elections in the shortest term for the good of the country."

All this came after Vizcarra signed an executive order to dissolve Congress as he considered that the legislature didn't go through with the head of state's proposed vote of confidence, meant to keep lawmakers from appointing up to six out of seven justices in the Constitutional Court, a likely referee in any legal dispute between the government and Congress.

However, after Vizcarra's decision was announced that same Congress approved the vote of confidence, leaving the country at a critical political standstill. Just hours after the announcement, lawmakers who dubbed the decision as “soft coup” voted Monday night in favor to suspend Vizcarra for one year due to "moral incapacity," appointing his VP Araoz as interim president.

Now with Araoz's resignation, it will come down to the Constitutional Court to decide if Vizcarra’s decree is valid, which would result in parliamentary elections in January 2020.

The power struggle between the executive and legislature has brought Peru’s young democracy to the brink of a constitutional crisis, threatening to grind lawmaking to a halt and potentially trigger unrest in one of Latin America’s most stable economies.