One confirmed dead during strike in Ecuador, dozens detained 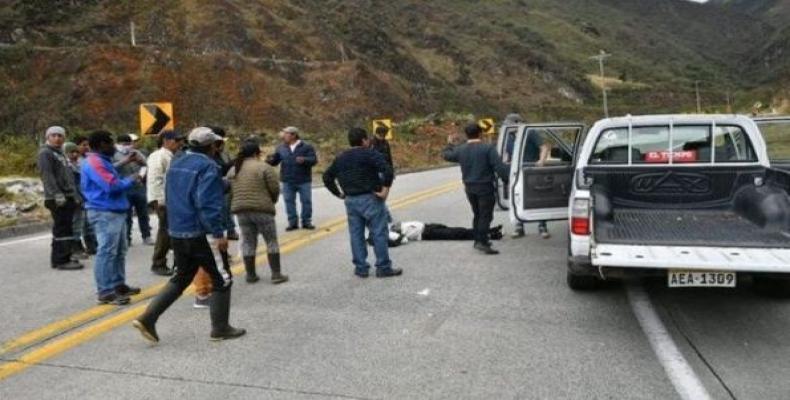 Quito, October 6 (RHC)-- Ecuadorean authorities have confirmed Sunday the first casualty due to the nationwide strike against President Lenin Moreno’s neoliberal reforms, which has now reached its fourth day.

The government of the southern province of Azuay, near the city of Cuenca, issued a statement reporting that Raul Chilpe died Saturday as first respondents were not able to reach him due to roadblocks placed and enforced by workers and people from this area.

Chilpe was part of the protests and was hit by an unknown car that tried to avoid the blockage. The authorities “regretted and rejected” the measures and blamed the president of the parish Carlos Morales.

As violent clashes continue between security forces and protestors, thousands of Indigenous peoples are making their way to Quito and are expected to reach the city by Monday. Indigenous-led protests toppled three presidents in the decade before Rafael Correa took power in 2007.

On Sunday, the government announced that classes across the highland provinces, including the capital, will be suspended on Monday.

Due to the gravity of the confrontations, the Confederation of National Indigenous of Ecuador (Conaie) declared a parallel state of exception within their territories, warning that military and police forces will be apprehended and Indigenous Justice will be applied to them. According to Ecuador’s constitution, nationalities and people have special sovereignty of their ancestral lands.

Meanwhile, the central government has begun arresting shopkeepers for raising food prices. The government said 20 people were detained over the weekend for over-charging for products including corn, onions, carrots, and potatoes, which are all subject to price controls.
“There is no justification for raising the prices,” Interior Minister Maria Romo said in a statement.

Ecuadoreans complain consumer prices have risen sharply as a knock-on effect of Moreno’s abolition of fuel subsidies, which has also triggered the nation’s worst unrest in more than a decade. There supermarkets in the main cities of the country starting to report shortages as they begin to run out of stock of food products.

“Everyone’s raising prices with the excuse of the gasoline price rise,” said disgruntled pensioner Camilo Salazar, 65, at a food market in the coastal city of Guayaquil where prices had risen up to a third in just a few days.

On Saturday, Moreno’s government issued a statement informing that bus fares will increase to no more than US$0.40 but that will be a job for local governments to enforce. Yet no procedures were presented, users reported on social media that immediately and without local government issuing the rulings bus drivers started to raise the prices.

Despite transportation union leaders announced Friday afternoon they had "completed their goal" in relation to the now two-day strike across Ecuador, and were ending their work stoppage. Other unions, workers, and social organizations have maintained the protests which waned in during the weekend but are expected to regain force again on Monday.

This comes as Ecuador's President announced las week the elimination of gasoline subsidies, tax and labor reforms, and other economic measures aimed at complying with the conditions of the loans granted by the International Monetary Fund (IMF).

In a televised speech, he stated that executive order 883 “liberates the price of diesel and extra gasoline," justifying his decision by saying that the Ecuadorean state allocates more than $1.3 billion a year in fuel subsidies.

Moreno’s popularity has sunk to below 30 percent from above 70 percent after his 2017 election, however, he continues to have the support from the business elite and military.