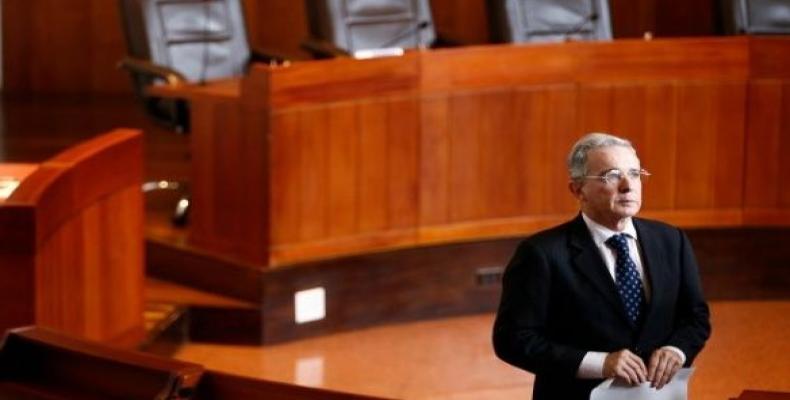 The court will have 10 days to determine whether or not to press on with the investigation.
Investigations into Uribe’s connection to the right-wing death squad Bloque Metro took an unexpected turn against him when it emerged that he was bribing a former member for favourable testimony.

Colombian newspaper El Tiempo confirmed the validity of claims made by former paramilitary ‘Victor’ that Uribe’s lawyers had paid him over half a million dollars, along with other payments, for favorable testimony.

‘Victor’ is a former paramilitary with Bloque Metro, a right-wing death squad that Uribe is alleged to have helped create.  It is reported that Victor was supposed to testify that one Alberto Guerrero had never been part of the group.  This was needed because Guerrero is who first exposed Uribe’s role in the death squad.  In an exclusive interview with teleSUR in 2013, Guerrero outlined in detail Uribe’s links to his former group.

Also among the allegations against him is that he paid for false testimonies to “politically finish off” left-wing lawmaker Ivan Cepeda. Congress threw out the case against Cepeda and pursued an inquiry into Uribe instead.

Uribe is the poster-boy of right-wing paramilitarism in Colombia.  He cooperated closely with the U.S. under ‘Plan Colombia’ to intensify the country’s civil war.  Today, he opposes the 2016 peace accords signed by the state and the FARC.  He recently called on his ally President Ivan Duque to scrap the agreement.