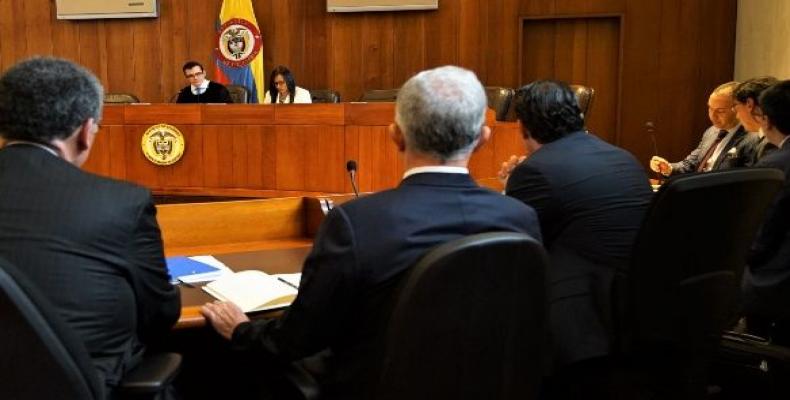 Bogota, October 9 (RHC)-- Colombia’s Supreme Court announced that they are formally filing criminal charges against former right-wing President Alvaro Uribe for bribery and fraud. The court made the decision late Tuesday evening after Uribe had completed his first day in court.

The court ruling represents an intensification of Uribes legal troubles, as they are no longer just an ‘investigation.’  The move is supported by more than 78 percent of Colombians according to a new poll, the results of which will be bad news for Uribe’s ally, President Ivan Duque, who has expressed his backing for the controversial ex-president.

Among the charges he must answer to is that he paid for false testimonies to “politically finish off” left-wing lawmaker Ivan Cepeda, who had been exposing his links to paramilitarizm.  Congress threw out the case against Cepeda and pursued an inquiry into Uribe instead.

Another one of the serious charges he faces is that he bribed former paramilitaries huge amounts to testify that Uribe was not involved in the death squad known as ‘Bloque Metro.’

Uribe is one of Colombia’s most divisive figures and was a close ally of George W Bush while serving as president.  He has come to represent the far-right paramilitarism of Colombia’s long civil war, whose end with the 2016 peace accords he opposed.  This was reflected during the trial as his supporters and counter protests faced off outside the courthouse.