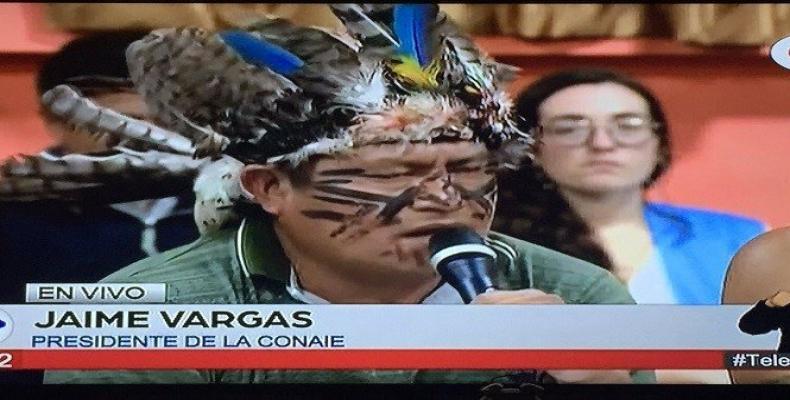 Quito, October 13 (RHC)-- Representatives from the Confederation of Indigenous Nationalities of Ecuador met with President Lenín Moreno on Sunday to begin a dialogue with the mediation of the Episcopal Conference and United Nations of Ecuador.

Moreno opened the talks claiming that he has "always treated Indigenous peoples with respect and affection."

For his part, the President of the Confederation of Indigenous Nationalities of Ecuador (Conaie), Jaime Vargas, emphasized that Indigenous people are working for the construction of a multi-national Ecuador, emphasizing that "we work for the freedoms of all men and women of the country."

Addressing the recent austerity measures taken by the government, Vargas said: "It is a measure that affects the poorest sectors.  Price increases in transportation do not benefit our people.  The measures generate social injustice and have no fiscal coherence.  They are measures that have caused a social upheaval and million-dollar losses to all economic sectors of the country."

"We call for the repeal of Decree 883 and ask the president to respect the current legal system.  There are constitutional rules that must be respected, the improvisation of economic policy has led us to this social upheveal."

And the president of the Confederation of Indigenous Nationalities of Ecuador said: "We are millions who now ask you to place your confidence in peace, for the stability and recovery of the country.  Repeal the decree and let's seek together prosperity, social justice and good living."