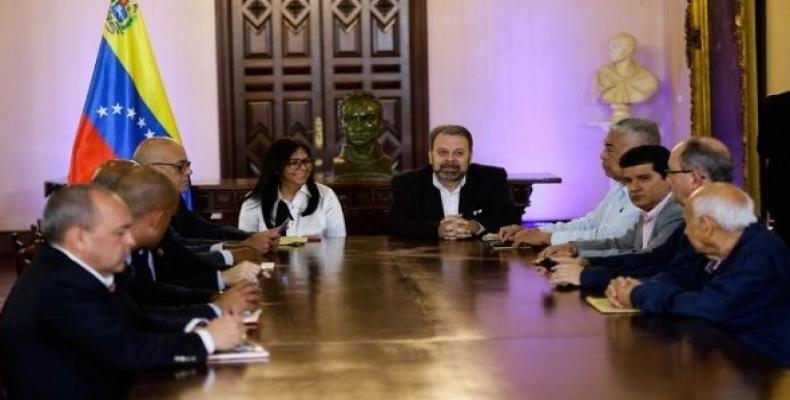 Caracas, October 17 (RHC)-- The Minister of Communications of Venezuela Jorge Rodríguez said that progress has been made around the agreement between the government and opposition parties, one month after the installation of the political dialogue in Caracas.

Rodríguez told reporters that a complimentary discussion table was set up on the formation of a new National Electoral Council (CNE), for which the participants should look for avenues of discussion with the people and political factors.

Rodríguez noted that during the talks, they evaluate the expansion of electoral guarantees, in preparation of the upcoming parliamentary elections.  He said they are preparing lists which were primarily agreed upon during the dialogue held in the Dominican Republic.  The minister reported that they also are also working on returning to the proportional representation mechanism.

Regarding the freedom of some prisoners in the country, he said that the president of the Truth Commission and Attorney General Tarek William Saab will offer details on the measures to suspend sentences and the people who will be benefited.

The political factors of Venezuela also maintain consensus regarding the dispute over the Esequibo territory and the rejection of Washington's coercive measures against the South American nation.

Rodríguez explained that a table was installed on the effects of the U.S. blockade on the economy, and to look for ways to promote the exchange of oil for medicine and food.