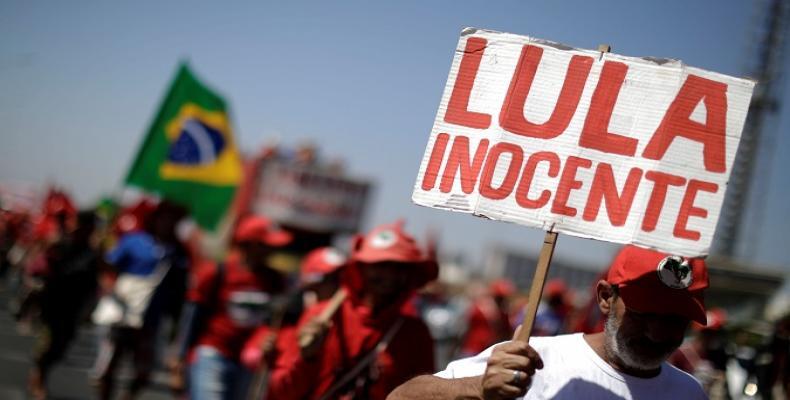 Brasilia, October 27 (RHC)-- The former president and leader of the Workers' Party (PT) of Brazil, Luiz Inacio Lula da Silva turned 74 on Sunday, as he serves multiple prison sentences over corruption charges that were based on shaky evidence in an unfair trial.

Lula was born in 1945, in the city of Garanhung, in the state of Pernambuco, in northeastern Brazil.  At the age of seven, he migrated with his family to the state of Sao Paulo, city of Guarujá, in search of work opportunities.  He started working at 12 years of age in different activities, such as shoeshiner and a mail carrier.  At age 14, he entered a metallurgical company.

In 1968, two years after the military dictatorship was imposed in Brazil, Lula made contact with the union life and that same year his older brother, Frei Chico, a member of the Brazilian Communist Party, was arrested and tortured by the military.  There began his struggle for human rights.  In 1975, he was elected president of the Union of Metallurgists of Sao Bernando and Diadema.

Lula has shown his fondness for football and is a fan of the Sports Club Corinthians of São Paulo.  During his first presidential term in 2003, he launched the Statute of the Amateur, to make the publication of sold ticket numbers and numbers of attendees mandatory, as well as to attend suggestions and complaints from the parties.

Before coming finally taking office, Lula had three tries at the presidential seat.  However, it was only in the elections of October 27, 2002, that he was elected in the second round with 61 percent of the vote.  He is the first worker president of the South American country.

He has been imprisoned twice.  The first time in 1980, when he was detained under the full military dictatorship for 31 days for "undermining the national order."  Then, in April 2018, he was arrested for alleged corruption with a sentence of 12 years and 11 months in prison. Legal experts and his supporters argue that the charges were political as the prosecution had struggled to present concrete evidence against him.

Also, recent exclusive reports by The Intercept media outlet revealed leaked conversations between judges and prosecutors in charge of the Lula case, showing that his arrest and subsequent convictions were an effort to prevent him from running as a candidate in the 2018 elections.