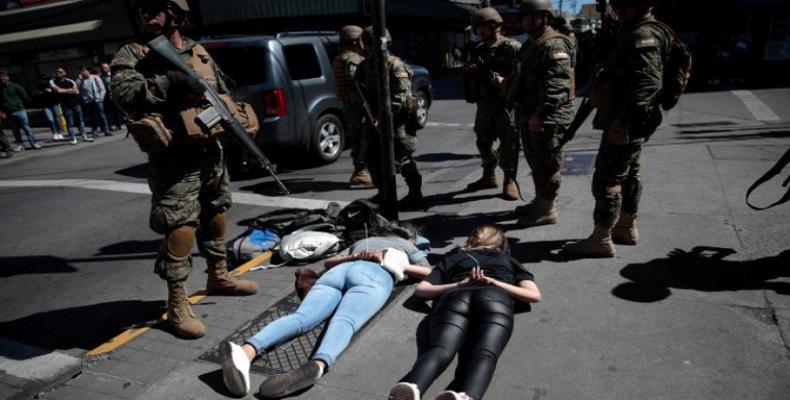 These cases correspond to events of violence perpetrated by security forces between October 18 and October 27th.  Of the total reported, 533 cases are related to illegitimate constraints, 206 are cases of abuse, 18 are torture cases and 83 are related to crimes such as serious injuries, attempted homicide and homicide.

“Among the crimes investigated, based on the information provided by the victims at the time of filing the complaint, eight are facts constituting sexual abuse or rape; four would correspond to threats of committing sexual crimes and 29 to undressing,” the Prosecutor's Office said, adding that 713 victims are adults and 122 are minors.

The Public Ministry also reported that 597 complaints were filed against the Chilean Military Police ("Carabineros"), 45 against Army members, 16 against the police detectives and eight against Navy officers.  In about 174 cases, the state institution involved has not been identified yet.

With the government's popularity at an all-time low, Chileans have been calling for new protests, while the United Nations has said it will send a team to investigate allegations of human rights abuses.

While Piñera continues to avoid mentioning the citizens' request for his resignation, he announced earlier this week that he does not rule out the possibility of drafting a new Constitution.  "We are going to analyze structural reforms after listening to the Chileans... I don't rule out any structural reform."

The Chilean president also openly supported the Carabineros and held that his Government has nothing to hide regarding human rights.