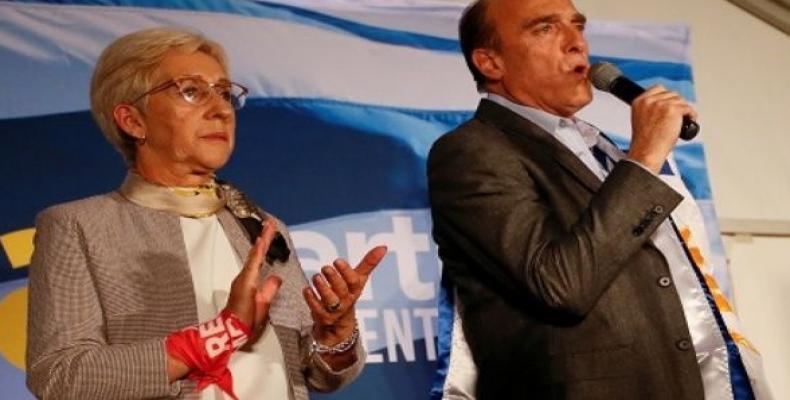 Montevideo, November 5 (RHC)-- With just a few weeks before the runoff vote on November 24th between the left-wing coalition Broad Front candidate Daniel Martinez and the conservative National Party’s senator Luis Lacalle Pou​, campaigning has begun, with the right-wing candidate putting together a coalition.

Over the past several days, the ruling Broad Front’s candidate and former Montevideo mayor traveled across the capital’s neighborhoods to participate in assemblies, activities and to talk with the people, hoping to change the campaign strategy before the balloting.

"We said we were going to walk with the people to ask for their trust.  Today we listened and talked in different neighborhoods, moved by the strength of the people and their potential to rewrite the future of our nation," Martinez tweeted.

The left-wing politician toured several areas on the periphery of Montevideo with his running mate Graciela Villar, as part of their campaign called "vote to vote."  They spoke with neighbors, shopkeepers, students, housewives, workers, who expressed their concerns about what may happen to them and to the country if the Broad Front were not to be chosen for another mandate.  A lot of them said they had had other options for the first round but will this time, give their vote to the party.

Throughout the week, the Broad Front's base committees were filled with young people, militants and ordinary citizens who gathered in mass assemblies with the same concern: how to win on November 24th and ensure the continuity of the left-wing project.

"I think Uruguay is at risk.  What has been built in these fifteen years is at risk.  This is not dividing the population.  It's debating ideas,” Martinez reaffirmed and went on reiterating that "the region is in a situation of chaos and we do not want chaos to cross borders,” alluding to the situation in Chile.

Meanwhile, on Monday and Tuesday, right-wing's Lacalle Pou and the other opposition leaders will sign a document called “Commitment for the Country” - an agreement to form a government coalition in case the National Party candidate wins the vote against Martinez.  The agreement has been brewing long before the first round, and Lacalle Pou himself confirmed it that same day as soon as the results were known.

Martinez compared it to an agreement made in 1999 between the National Party, the right-wing Colorado Party, and other right-wing parties, to increase votes in the ballot and win the presidential elections against the then Broad Front candidate Tabare Vazquez.

“Now an agreement text is circulating among them [the right] and it is not necessary to remind them how it all ended,” he added.