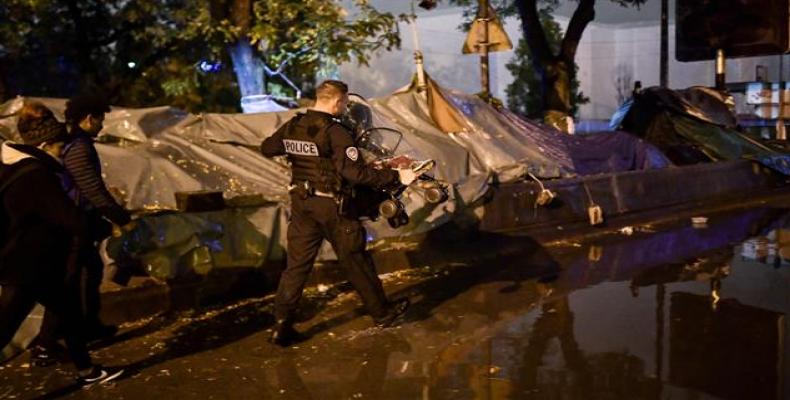 On Thursday, some 600 security forces took several hundred people from two camps in the Porte de la Chapelle area to reception centers by bus, in an operation that began under steady rain early in the morning.

The Porte de la Chapelle area has housed illegal refugees living in tents under and around the flyovers of the capital’s Peripherique ring road and the ramps to the A1 highway.  It is believed that between 600 and 1,200 migrants had been living in the two camps.  Many of them were reportedly from Afghanistan or sub-Saharan Africa.

The evacuations came a day after Paris announced that it had adopted a series of measures to a “take back control” of its immigration policy, imposing quotas for refugee workers and blocking newly-arrived asylum seekers access to non-urgent healthcare.

“I cannot allow a dangerous situation like this... all this cannot remain,” Paris police chief Didier Lallement told reporters at the scene.  He added that the evacuation, one of the largest in the capital since camps regularly began springing up in 2015, “was decided in the framework of the implementation of the (government) plan, it did not happen by chance.”

Since the closure of a huge refugee camp in Calais three years ago, refugees have been increasingly moving to Paris, which has been shutting down tent camps only to see them pop up again in other areas a few months later.

President Emmanuel Macron’s administration has vowed to crack down on immigration, a move widely regarded as an attempt to keep right-wing parties from siphoning off voters prior to municipal elections next year.  “We want to take back control of our migration policy,” Prime Minister Edouard Philippe told a press conference on Wednesday.

Back in September, French police forced 1,000 refugees to leave a gymnasium in the vicinity of the northern port of Dunkirk following a court ruling that declared the makeshift camp a health and security hazard.

The refugee camp in Calais — a squat nicknamed “Jungle” — was razed to the ground by French authorities in 2016.  It was home to 10,000 refugees at its height.  Since then, French authorities have adopted a policy of trying to prevent refugees forming similar camps.  However, rights groups have lambasted police tactics in evacuating refugees.

Back in December last year, France’s human rights ombudsman, Jacques Toubon, also condemned the “extreme destitution” suffered by people camping out or sleeping under bridges.  He accused authorities of “trying to make (refugees) invisible” by regularly demolishing their camps without providing them with viable alternatives.

The situation in France is part of a wider refugee crisis across Europe, which has been struggling with its biggest influx of asylum seekers since World War II, as people flee conflict-ridden zones in Africa and the Middle East.