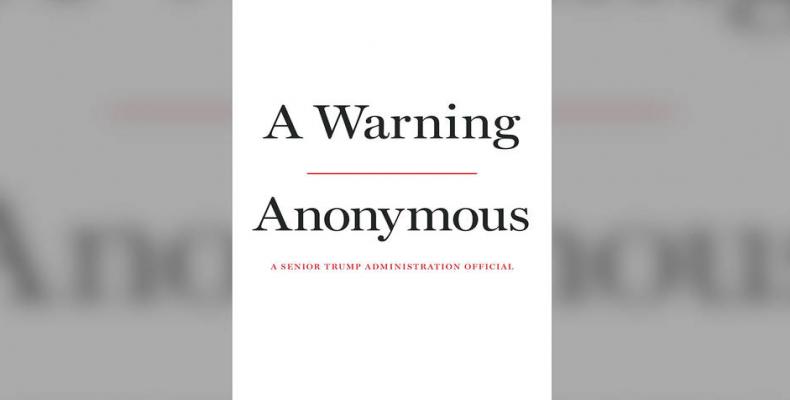 Washington, November 8 (RHC)-- An anonymous White House official slams Donald Trump in a new book that will hit the stands on November 19th.

The forthcoming book titled “A Warning” was written by "a senior Trump administration official."  The author is the same person who published an anonymous op-ed in The New York Times last year titled “I Am Part of the Resistance Inside the Trump Administration.”

In the book, the author describes senior officials waking up and trying to respond to Trump’s overnight Twitter announcements, writing: “It’s like showing up at the nursing home at daybreak to find your elderly uncle running pantsless across the courtyard and cursing loudly about the cafeteria food, as worried attendants tried to catch him.  You’re stunned, amused, and embarrassed all at the same time.  Only your uncle probably wouldn’t do it every single day, his words aren’t broadcast to the public, and he doesn’t have to lead the U.S. government once he puts his pants on.”

The author also claims Trump once asked White House lawyers to write legislation to send to Congress aimed at reducing the number of federal judges, after various judges had thwarted Trump’s policies.  Trump reportedly said: “Can we just get rid of the judges?  Let’s get rid of the [expletive] judges.  There shouldn’t be any at all, really.”