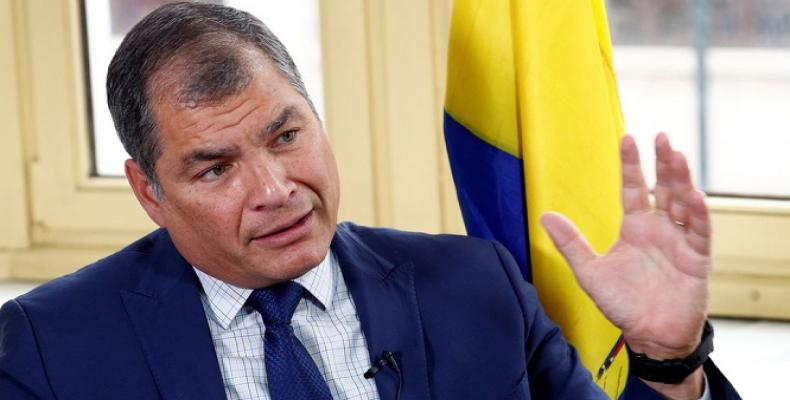 Moscow, November 12 (RHC)-- Former Ecuadorean President Rafael Correa said the resignation of Bolivian President Evo Morales was the result of a coup and that events could have ended in worse violence if the socialist leader had not resigned.

In an exclusive interview with RT, Correa condemned the coup in Bolivia and noted that such insubordination of the country's armed forces "cannot exist in a constitutional rule of law" or in a democracy.  "If Evo Morales had not resigned, there would have been a bloodbath because there was no public order.”

He added that there can be no true democracy until the judging actors are the people and "not the uniformed ones," and stressed out that he wouldn’t be surprised if there were foreign forces behind the efforts to overthrow Evo Morales.

Rafael Correa also said that the Organization of American States (OAS), which encouraged Morales to call new elections, did not condemn the violent events in socialist Bolivia because democracy is only valid when it serves the interests of the right.

"You can see the double standard that exists in all of this.  For the right, democracy is valid as long as it satisfies its interests.  When those interests cease to be fulfilled, suddenly democracy is not enough and "the situation must change by blood and fire, as we are seeing in Bolivia."

Correa said that the Bolivian people have experienced dignity and prosperity under Evo Morales' leadership and that after the recent events, people throughout Latin America will soon be convinced that the OAS is "useless" and nothing more than "an instrument of U.S. domination."

The OAS wants elections in Bolivia, but only without Morales because they know he has already been democratically elected by the people.  "They have just forcibly removed a president who has won the elections broadly, with more than 10 points.

Morales called for new elections on Sunday with the goal of "seeking peace" in Bolivia, but the opposition did not accept Morales' participation in the new elections and urged protesters and the military to continue mobilizing in the streets until he resigned.