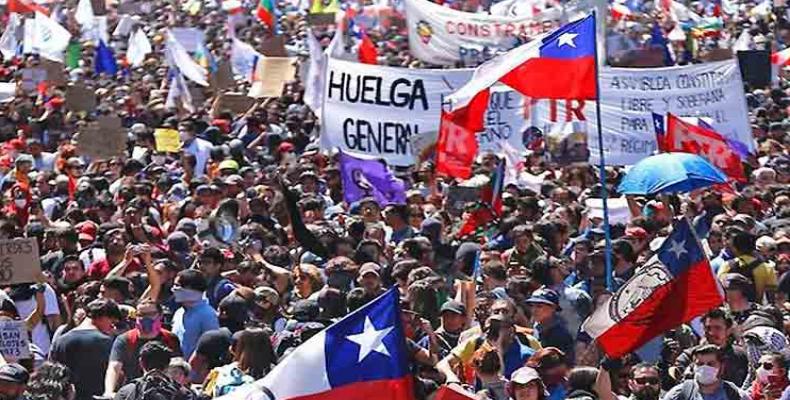 Santiago de Chile, November 13 (RHC)-- Nearly 130 organizations joined the general strike Tuesday, as hundreds of thousands of Chileans across the country took to the streets in the biggest demonstration since the beginning of the anti-neoliberalism protests.

"The General Strike stands for the unity of both public and private workers who are seeking structural transformations and a constituent assembly," Chile's National Association of Fiscal Employees (ANEF) said and added that what prevails is a broad effort for "the conquest of social rights."

A wide range of sectors joined the strike as port, agro-industrial, commercial, banking, health, and public services workers, as well as teachers and students,  unified their petition of structural changes through a Constituent Assembly.

“The whole country will be paralyzed.  This, in the context of demanding a Constituent Assembly, as a new Chile is being claimed in the streets,” President of the Union of Teachers Mario Aguilar told El Desconcierto.

Although the Chilean government has agreed to replace the 1980 Constitution, which dates back to the Pinochet dictatorship, it will be President Sebastian Piñera, cabinet members and political allies who will lead the process of re-writing the document, according to Interior Minister Gonzalo Blumel.

Chile's Communist Party said in a statement the Piñera administration had still not gone far enough, demanding a referendum even before the process begins so the "people can determine the mechanism for drafting the new Constitution."

“What the people demand is a New Constitution elaborated in a broadly democratic and participatory process.  That path is the constituent assembly.  Citizens will not validate a constitution emanating from Congress even if, in a deceptive way, it is assigned the name of ‘constituent’,” the statement reads.