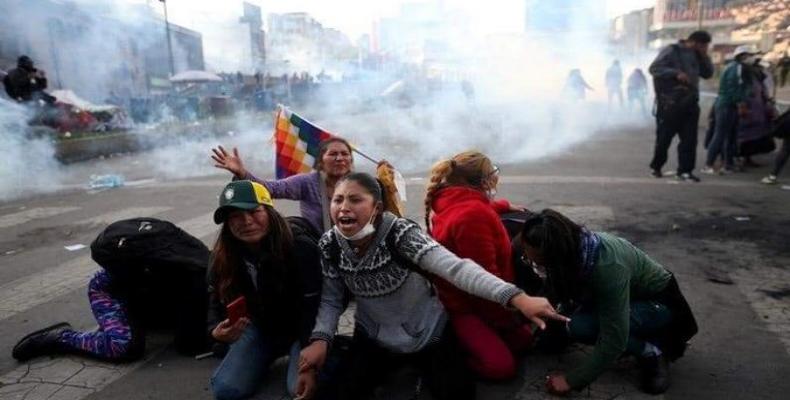 United Nations, November 17 (RHC)-- The Inter-American Commission on Human Rights (IACHR) condemned the “disproportionate use” of police-military force in the repression that took place over the weekend in the city of Cochabamba where nine coca growers died and dozens were injured.

The IACHR expressed "concern about the actions of the armed forces in the operations carried out in Bolivia since the beginning of the week" and recalled that the "Inter-American standards establish the duty to limit their participation as much as possible in the control of internal disturbances," through its Twitter account.

The international body posted a video circulating on social media that shows five victims lying on the ground and condemned the "excessive use of force," recalling the "State is under an obligation to ensure the right to life and physical integrity of peaceful protesters."   "Firearms must be excluded from the devices used to control social protests," warned the IACHR in its statement.

On Friday, thousands of coca growers tried to enter the city of Cochabamba in protest against the coup d'état against President Evo Morales that took place on Nov. 10. The mobilization was intercepted in the Huayllani River, near the town of Sacaba, where there was a blockade by the military forces resulting in the death of nine people, more than 30 injured and 169 arrested, according to a preliminary report of the Ombudsman's Office.

The human rights body also extended its warnings with a statement from the Office of the Rapporteur for Freedom of Expression regarding the "threats of expulsion of Bolivian authorities, attacks and use of gas tears by the police against journalists covering the protests," such as the repressions suffered by  Argentinean journalists from media such as TN, America 24, Cronica, and Telefe.

On the other hand, the U.N. High Commissioner for Human Rights Michelle Bachelet also warned on Saturday about the dangerous path that protests are taking in Bolivia after the deaths in Sacaba.
"We have information that at least seventeen people have died in the context of the protests, including fourteen only in the last six days," Bachelet said in a statement from Geneva.

The U.N. official expressed concern that in addition to the deaths and the hundreds of injuries left by the crisis in the country, there were multiple arrests and detentions, including more than 600 people arrested since Oct. 21 many of them during the last days since the coup.

"I am really concerned about the situation in Bolivia that can get out of control if the authorities do not handle it carefully, according to international norms and standards that govern the use of force and with full respect for human rights," said the High Commissioner.