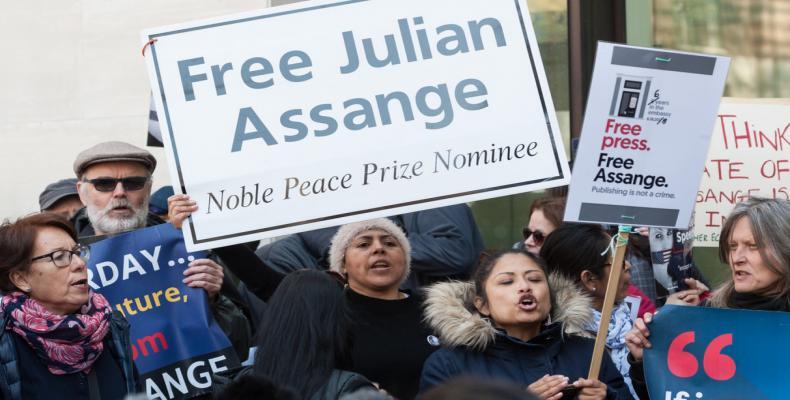 Moscow, December 12 (RHC)-- The health situation of Julian Assange, who is being held in London, worsens while he is awaiting extradition to the United States, warned Russian Foreign Ministry spokeswoman Maria Zajárova.

Assange is seriously ill because he has no medical assistance or good nutrition, in addition to alleged psychological torture, the Russian official reported.  "The situation created around him testifies to the violation by the Western world of every imaginable law and rule that guarantees the freedom and security of journalists," Zajárova added.

In addition, he noted that this is a true lynching towards a person who is dedicated to real journalism.

Russia's concern adds to that of specialists from England and other European countries, who have stated that Assange needs to be transferred to a medical center with qualified personnel to examine their physical and mental health status.

"Mr. Assange's situation is critical.  We believe that his extradition to the United States is unfounded and illegal.  Assange is being held in the London jail under conditions that contradict essential human rights," said the head of the international legal team of Assange, Baltasar Garzón.

Assange's father, John Shipton, also expressed concern about his son's health and at the time said he fears he may die in jail after the physical and mental conditions he suffers.

In June 2012 Julian Assange, took refuge in the embassy of Ecuador based in London to evade his extradition to the United States.  The WikiLeaks founder is currently under extradition request by U.S. authorities for an espionage charge for showing the world the secret activities of the U.S. army in Iraq and Afghanistan.