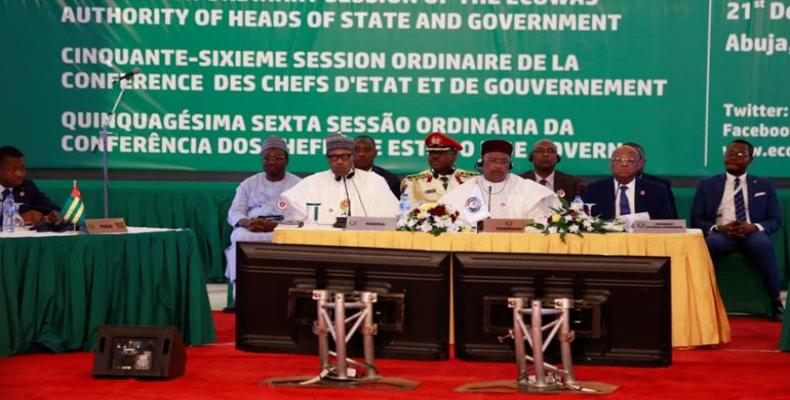 Abuja, December 22 (RHC)-- Heads of state and governments across West Africa met on Saturday in Abuja, the capital of Nigeria, for the latest round of discussions on pressing matters in the bloc, including regional integration and a concerted effort to tackling armed rebellions.

Nigeria's President Muhammadu Buhari presided over the summit of 15 member states of the Economic Community of West African States (ECOWAS), urging his fellow leaders to forge a stronger partnership in addressing the region's security challenges.

Buhari called for a minute of silence in honour of the victims of an armed attack at a military base in the neighbouring Niger earlier in December.  "It was with great shock and immense pain that I received the news of the tragedy last week in the Tilabari region of Niger Republic, where over 33 valiant soldiers and other citizens of the country were brutally massacred in yet another cowardly terrorist attack by these enemies of peace and progress," Buhari said in his address.

"As we mourn this enormous loss, our thoughts and sympathies go to the families of these heroes and the entire people of Niger Republic."

Armed group Boko Haram's campaign began in 2009 and has displaced over 2.2 million people across Nigeria, Chad, Niger and Cameroon since, with no signs of slowing down despite counterattacks by a joint multinational force across borders.

Boko Haram's faction, the Islamic State of West Africa Province (ISWAP), has also gone on a spree of violence, attacking military formations in those countries. The Tilabari attack was the deadliest in recent times in Niger.

In Mali and Burkina Faso, groups such as the al-Qaeda-affiliated Jama'at Nasr al-Islam wal Muslimin (JNIM) have followed suit, killing thousands of people in recent years.  There were a total of 4,776 reported fatalities in the Sahel between November 2018 and March 2019, according to the non-profit Armed Conflict Location and Event Data Project (ACLED).

In September, ECOWAS convened an extraordinary summit on "terrorism" in Ouagadougou, capital of Burkina Faso. Some of the bloc's members have now called for a swift implementation of resolutions reached at that summit.

"Our region has been hard hit by terrorist attacks every passing day, threatening almost all the national and regional achievements we have made," said Niger's President Mahamadou Issoufou.

"We, therefore, hope that the prompt implementation of the recommendations of our extraordinary summit on terrorism held on September 14 in Ouagadougou will enable us collectively meet this challenge, which appears to be an attack by faithless criminals, on our dignity and sovereignty."

Also featuring on the agenda was the presidential election in Guinea Bissau and the matter of a common currency for the region.  The idea of a single ECOWAS currency and the West African monetary zone was first mooted decades ago with 2000 set as the initial launch date.  The currency, known as the Eco, is now expected to be launched in 2020.

Some of the other leaders in attendance included George Weah of Liberia and Gambia's Adama Barrow.  Akinwumi Adesina, president of the African Development Bank and former Nigerian agriculture minister, was also present at the summit.