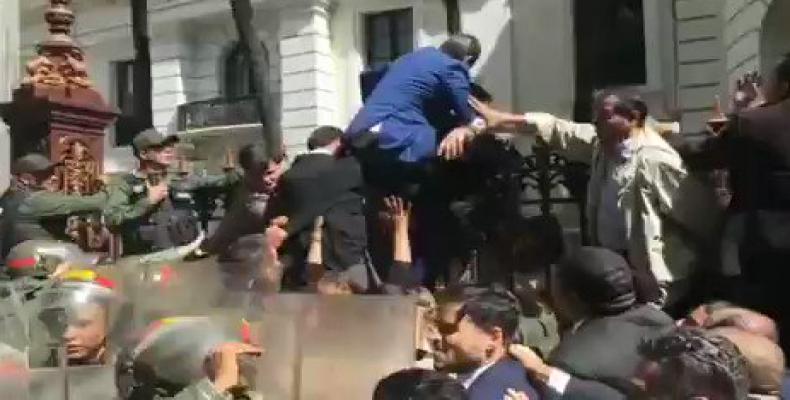 Caracas, January 6 (RHC)-- Venezuelan opposition leader Juan Guaido has been accused of pulling a PR stunt after a dramatic video showed him mounting a fence to enter the parliament, as it voted to replace him as the head of the legislature.

The opposition-led National Assembly changed guard on Sunday, with the majority of lawmakers electing Luis Parra, an lawmaker from the centrist Justice First, a party in opposition to Venezuelan President Nicolas Maduro’s United Socialist Party (PSUV).

One of the absentees was U.S.-backed opposition figurehead Juan Guaido, the now former leader of the National Assembly, who proclaimed himself the country’s ‘interim president’ a year ago.  He has been widely accused of corruption and dividing opposition forces to promote his own agenda.

Guaido and a group of his followers were recorded attempting to climb a fence surrounding the legislature, with uniformed security guards pulling them back.  The video has spread like wildfire online, and was picked up by mainstream media in the West, which spun it as evidence of Guaido being barred from participating in the key parliamentary vote by the supposedly ‘sinister’ Maduro ‘regime.’

But there’s a twist.  Other footage shows Guaido chatting with members of the National Guard and refusing to enter the premises unless his followers -- five other deputies who were stripped of parliamentary immunity pending criminal prosecution -- are allowed inside.  After his plea was rejected, Guaido complained and attempted to storm the building.

After his show failed, Guaido convened a parallel assembly at an office of the pro-opposition El Nacional newspaper.  His supporters “re-elected” Guaido and swore him in as the parliament’s leader, proclaiming the National Assembly vote unlawful.

Some say that Guaido had the newspaper’s office ready for the ceremony long before he showed up, suggesting this was nothing more than a publicity stunt.

That didn’t stop some top political figures – like the U.S. secretary of state and Bolivia’s self-declared interim president, Jeanine Añez – from congratulating Guaido on his ‘re-election’ while taking aim at Caracas for allegedly impeding his access to the building.