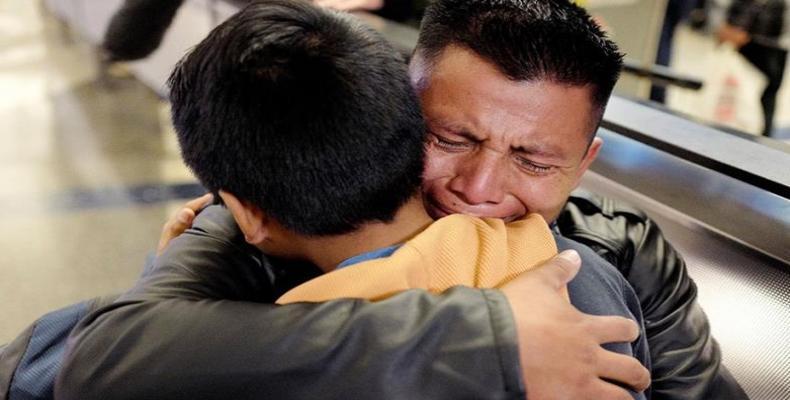 Los Angeles, January 25 (RHC)-- Nine parents who were deported as the administration of U.S. President Donald Trump separated thousands of migrant families landed back into the United States earlier this week to reunite with children they had not seen in a year and a half.

The group arrived at Los Angeles International Airport from Guatemala City in a trip arranged under the order of a federal judge who found the U.S. government had unlawfully prevented them from seeking asylum.  An asylum advocate confirmed the nine parents were all on board the flight.

Some of the children were at the airport to greet them, including David Xol's nine-year-old son Byron.  David fell to one knee and tearfully embraced Byron for about three minutes, patting the back of his son's head.

"He was small," David said after rising to his feet.  He looked at his lawyer, who accompanied him on the flight, raised his hand about chest-high and said: "He grew a lot."

David, Byron and his lawyer, Ricardo de Anda, then embraced in a three-way hug and exchanged words in their huddle. Byron was all smiles. Father, son, lawyer and family sponsor eagerly left the airport for their hotel.

The reunion was a powerful reminder of the lasting effects of Trump's separation policy, even as attention and outrage has faded amid impeachment proceedings and tensions with Iran. But it also underscored that hundreds, potentially thousands, of other parents and children are still apart nearly two years after the zero-tolerance policy on irregular border crossings took effect.

"They all kind of hit the lottery," said Linda Grimm, lawyer who represents one of the parents returning to the United States.  "There are so many people out there who have been traumatised by the family separation policy whose pain is not going to be redressed."

More than 4,000 children are known to have been separated from their parents before and during the official start of zero tolerance in spring 2018.  Under the policy, border agents charged parents en masse with illegally crossing the U.S.-Mexico border, then placed their children in government facilities, including some "tender-age shelters" set up for infants.

The U.S. has acknowledged that agents separated families long before they enforced zero tolerance across the entire southern border, its agencies did not properly record separations, and some detention centers were overcrowded and undersupplied, with families denied food, water or medical care.

In June 2018, U.S. District Judge Dana Sabraw ordered the government to stop separating families and reunite parents and children.  At least 470 parents were deported without their children.  Some of the children were held in U.S. government facilities and ultimately placed with sponsors.  Others were deported to their home countries.

Accounts emerged of many parents being told to sign paperwork they could not read or understand or being denied a chance to request asylum in ways that violated federal law.  The U.S. Department of Homeland Security referred a request for comment to the Justice Department, which did not respond.

While the U.S. has stopped the large-scale separations, it has implemented policies to prevent many asylum seekers from entering the country.  Under its "Remain in Mexico" policy, more than 50,000 people have been told to wait there for weeks or months for US court dates.  The Trump administration also is ramping up deportations of Central Americans to other countries in the region to seek asylum there.

"People want to make this a heartwarming story, but it's not.  It's devastating," Sewell said.  "There is just no good reason why we had to do this to this child and this family.  And he symbolises thousands of others who have been put in this exact same position."