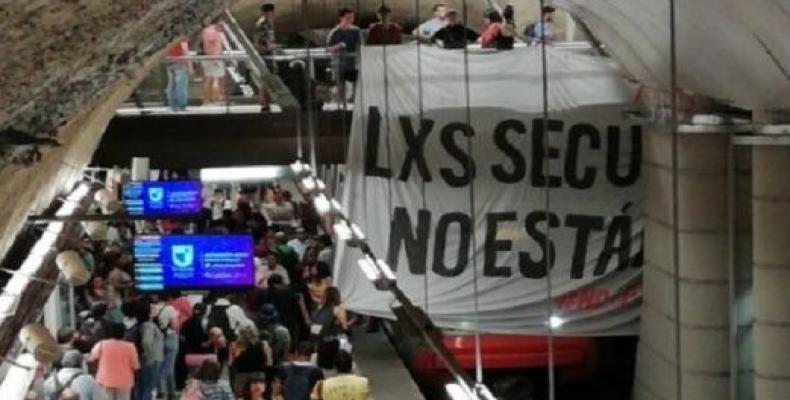 Santiago de Chile, January 27 (RHC)-- Chilean students have mobilized to reject the PSU selection test applied on Monday under strong security measures and implemented by the police to avoid protests inside the buildings where the exam will take place.

High school and university students, who have expressed their opposition to the repetitive and controversial PSU test that they claim is part of the profit and segregation system in Chilean education, protested at various points in Santiago, while the evaluation began.

The Department of Evaluation, Measurement and Educational Registry (Demre) indicated that the University Selection Test (PSU) is under protection by police and the Chilean Investigative Police (PDI) to avoid interruptions.

On the outskirts of the San Sebastián University, a place designated to carry out the PSU, there was a protest of about 50 young people shouting slogans against this evaluation.  A group of young people deployed a huge blanket at the Plaza Egana metro station against the evaluation and staged a rally this morning so the service was temporarily suspended until the Carabineros intervention took place.

In front of the offices of the Demre, there was a protest by the 8m Coordinator against the surrender of the PSU. Protesters threw stones at students who tried to enter the headquarters of the University of San Sebastián in Los Leones.

The Coordinating Assembly of Secondary Students (ACES) announced last week that it would boycott the completion of the test.

The PSU is a test rejected for its close relationship with market education imposed by the military dictatorship where significant modifications to the Chilean educational system were made by imposing rules of the market.