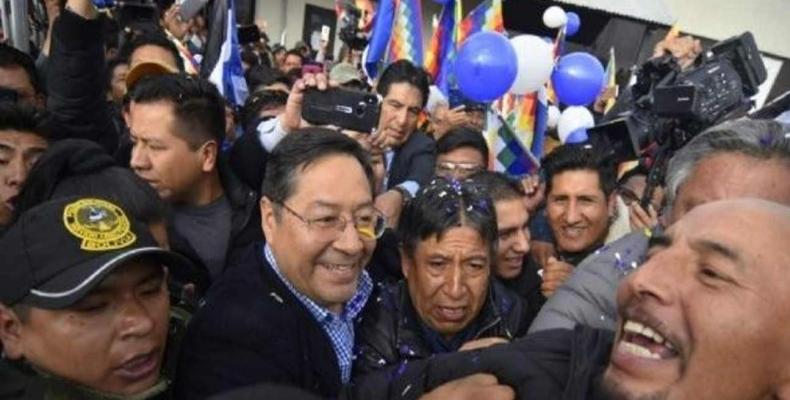 La Paz, January 28 (RHC)-- Luis Arce, the presidential candidate of the Movement To Socialism (MAS), arrived Tuesday in El Alto, Bolivia from Buenos Aires to participate in the campaign for May elections, although he said that “there are no guarantees” for a free and transparent electoral process.

Arce was received at the airport by dozens of MAS militants who carried the multicolored flag of the indigenous peoples (Whipala) and shouted slogans of hope and victory.  On January 24th, Bolivia's former president Evo Morales also referred optimistically to the Socialist candidate's chances of triumph.

"We are guaranteed a binomial that will allow us to succeed. Brothers and sisters, we must stay organized and united... Although they took away our power with weapons and bullets, we will recover it with the people's conscience and vote," the MAS leader said.

Before the arrival of Morale's former Economy Minister, Bolivia's coup regime, which is led by Senator Jeanine Añez, said that he can “quietly” conduct his election campaign.  The Presidency's Minister Yerko Nuñez said that there is no arrest warrant against Arce and that his return is guaranteed because "there is no political persecution of anyone."

At the same time, however, other members of the far-right political forces controlling Bolivia are planning the arrest of the Socialist candidate.  Earlier this week, the director of the Indigenous Development Fund, Rafael Quispe, who was appointed by the coup regime, warned that Arce will not be a candidate, because he will end up in jail if he returns.

"I hope that the Prosecutor's Office and the Police are at the airport... First, we are going to ask for his arrest and then we will present him to a precautionary judge so he can go to jail because there is a risk of escape," he announced.

Arce left Bolivia on December 6th with the support of the embassies of Mexico, Uruguay and Argentina.  On January 19th, he was elected as the MAS presidential candidate and his formula partner is former Foreign Minister David Choquehuanca.

According to the latest opinion polls, the Socialist candidates are the favorites to win the upcoming elections.