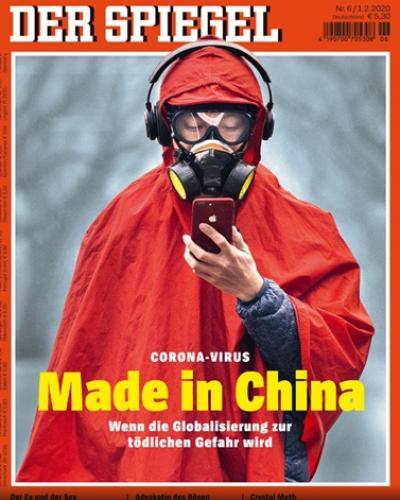 Beijing, February 6 (RHC)-- China has slammed the German media over spreading “discrimination and xenophobia” in the face of the deadly coronavirus outbreak -- with a leading German magazine in the crosshairs.

“Some particular media and media representatives, who have supposedly signed up to the values of objectivity and rationality, do not shy away from publishing racist statements and tolerating xenophobic tendencies, directed against China in particular,” the Chinese Embassy in Beijing said in a damning statement as it minced no words to express its “strong protest” and “highest dissatisfaction” over the issue.

The Chinese statement went on to affirm that “freedom of the press cannot be used to foster racist sentiments in German society,” adding that the Chinese and the Germans alike were “openly opposed” to the “dangerous tendencies” displayed by some media outlets, stopping short of actually naming any of them.

Yet, the condemnatory statement conspicuously came just days after one of Germany’s leading magazines -- Der Spiegel -- came out with a cover showing a person in protective gear and a headline reading: "Coronavirus.  Made in China.  When globalization turns into a deadly threat."

This fact did not escape the attention of some people on Twitter, who assumed that they found the supposed culprit behind China’s wave of outrage.  Some called it “a terrible journalism example” while others simply said that this latest cover is “not quite one of their best.”

The story behind the controversial headline appears to be quite neutral and deals with the potential impact of the coronavirus epidemic on the global economy, though.  Still, a poor choice of headline was apparently not the only blunder by Der Spiegel that didn’t sit well with the Chinese.  One of China’s leading news agencies -- Xinhua -- also singled out another story published by the magazine which it said “described China and the Chinese people using discriminative language.”

The article in question appears to be a satirical opinion piece by Stefan Kuzmany, the head of Der Spiegel’s opinon and debate section.  There, Kuzmany seemingly mocks exaggerated fears over the coronavirus outbreak and various speculation associated with it in a form of ‘dud advice’ that really shows what people should not do.

Still, the piece contains a particularly controversial section titled ‘A bit of racism is fine’, where the author says people who were always suspicious of the Chinese can now “let their resentment run wild.”  It is unclear whether the Chinese Embassy took these words at face value or just thought it was an extremely bad joke but it said it “hopes that the media or media representatives in question will demonstrate a thoughtful attitude and stick to their responsibilities instead of stirring up and spreading panic.”

Der Spiegel, meanwhile, neither removed nor commented on the articles that might have provoked an angry response from the Chinese.