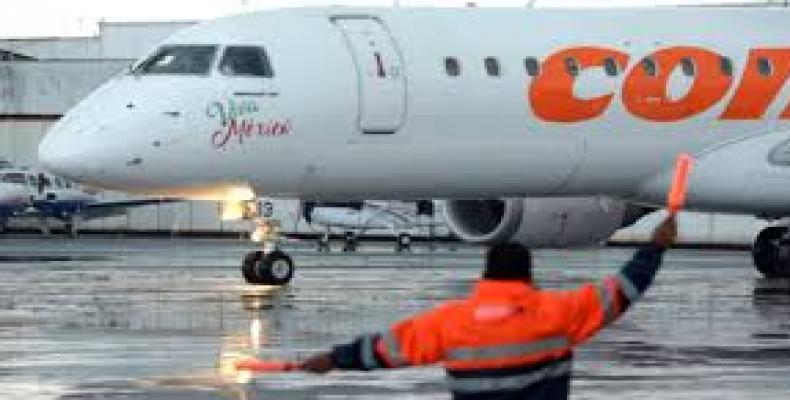 Caracas, February 8 (RHC)-- Venezuela’s Economy Minister Tareck El Aissami Saturday announced that his country will respond to the U.S. sanctions against Conviasa airlines, a public company that has 40 aircraft and 2,012 workers.

Besides offering commercial services, this airline carries out non-profit operations such as the transfer of people to other countries in cases of emergencies as well as transport-related actions for public programs such as "Return to the Homeland" and Mission Miracle.

"Conviasa works for the people and their service is beyond ideological issues," the Economy Minister said and stressed that his government will defend the company's business.  He also pointed out that the extraterritorial sanctions are not against President Nicolas Maduro, as the U.S. government argues.

“These are premeditated actions that try to harm families benefited by Conviasa,” El Aissami said and added that social organizations will make demonstrations to reject this new U.S. aggression.

On Friday, the U.S. Treasury Department’s Office of Foreign Assets Control (OFAC) placed Conviasa as subject to sanctions for being part of the Government of Venezuela.  Its airplanes were added to the OFAC’s Specially Designated Nationals List “to ensure strengthened compliance with U.S. sanctions.”

Through a statement released to justify this decision, the U.S. Treasury Secretary Steven Mnuchin said that President Nicolas Maduro's administration relies on Conviasa to shuttle officials around the world to "to fuel support for its anti-democratic efforts."

Over the last years, however, Conviasa's humanitarian work has allowed the return of Venezuelan emigrants from countries such as Colombia, Chile, Ecuador or Peru.

"We will continue exploring new destinations and advancing in the construction of an airline which reaches other peoples' free skies," the Economy Minister said.

For his part, Venezuela's Foreign Minister Jorge Arreaza said that his country will denounce U.S. sanctions at all international forums.