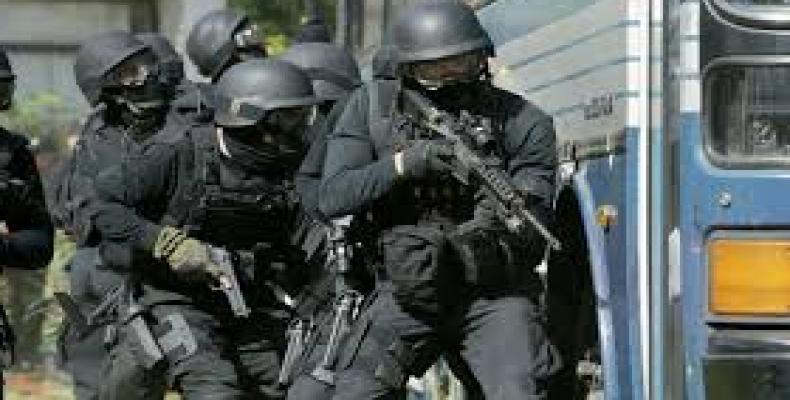 Washington, February 17 (RHC)-- In a move that appears destined to escalate tension between the White House and opponents, President Donald Trump is reportedly deploying Customs and Border Protection tactical units across sanctuary cities in the U.S. to assist with arrests of undocumented people—despite warnings from critics and rights advocates.

The New York Times reported on the plan, citing an official who received an e-mail describing the weekend deployment who read the text to reporters over the phone.  CBP spokesman Lawrence Payne confirmed the details.
“These are the bad times,” data researcher Michael Caley tweeted of the report.

According to the Times, agents from the Border Patrol Tactical Unit (BORTAC) will spread across the country to cities like New York, Detroit, Chicago, Atlanta, Houston, San Francisco, Los Angeles, Boston, New Orleans, and Newark, N.J. to work alongside Immigration and Customs Enforcement (ICE) officers to arrest people allegedly in the country illegally.

As the Times reported: With additional gear such as stun grenades and enhanced Special Forces-type training, including sniper certification, the officers typically conduct high-risk operations targeting individuals who are known to be violent, many of them with extensive criminal records.

The unit’s work often takes place in the most rugged and swelteringly hot areas of the border. It can involve breaking into stash houses maintained by smuggling operations that are known to be filled with drugs and weapons.

“I have read this article multiple times,” National Immigration Forum Ali Noorani said. “It is unbelievable how much this action will undermine public safety.  Unbelievable.”  The potential for violence is high, former CBP commissioner Gil Kerlikowske told the Times, calling the deployment “a significant mistake.”

“If you were a police chief and you were going to make an apprehension for a relatively minor offense, you don’t send the SWAT team,” said Kerlikowske.  “And BORTAC is the SWAT team.  They’re trained for much more hazardous missions than this.”

Trump has long railed against sanctuary cities for resisting his racist immigration policies and providing safe havens for the victims of ICE and CBP.  The president’s deployment of tactical units to the cities is the lastest move by the White House against his political adversaries, tweeted Cecilia Muñoz, vice president of the think tank New America.

“Officers trained in SWAT team tactics, sent to help with run-of-the-mill immigration arrests in major cities far from the border,” said Muñoz.  “Trump is using military-style tactics because he has a political beef with cities whose policies he doesn’t like.”

Progressives reacted with shock and alarm at the intensification of Trump’s already draconian immigration policies provided by the addition of the heavily armed BORTAC units.