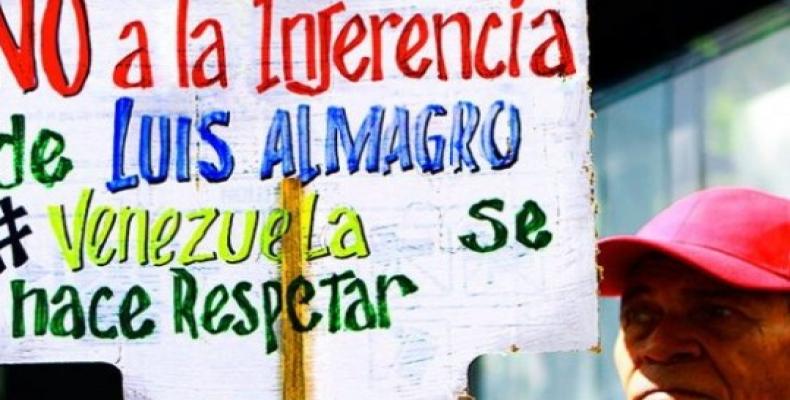 Panama City, February 19 (RHC)-- The presence of the Secretary General of the Organization of American States (OAS), Luis Almagro, in Panama, unleashed a wave of protests in country's social movements on Tuesday.

Almagro, who traveled to Panama at the invitation of the Chamber of Commerce and Industry to receive an award for his "valuable contributions" to democracy in Latin America, was received by the Social Movements in Panama City with banners and flags supporting Latin American unity.

According to Hugo Vera, the teleSUR correspondent in the country, said: "Panamanians demonstrate against the presence of the Secretary General of the Organization of American States, Luis Almagro, who was invited by the Chamber of Commerce and Industry."

The Chamber, an organization that groups Panamanian businessmen, demonstrates a profound ignorance by awarding a distinction to Almagro, who has led a "crusade" against Venezuela since 2015 using his position as OAS secretary general, said the Transforming Action Movement.

On more than one occasion, the leader of the Organization has supported the hostile policy of the United States in its attempt to "get out" of the legitimate government of President Nicolas Maduro, through destabilization and the invocation of military intervention.

During his stay in Panama, Almagro gave a symposium entitled The New Challenges of Social Peace and Democracy in Latin America, an intervention organized by the business community.