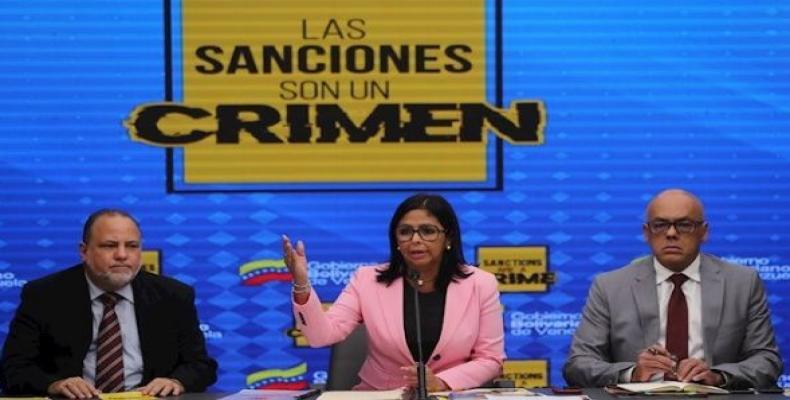 Caracas, March 7 (RHC)-- Venezuela's Vice President, Delcy Rodriguez, reiterated on Friday accusations against the United States for crimes against humanity.  During a press conference to announce the status of the lawsuit filed by the Bolivarian Government at the International Criminal Court, Rodriguez once again exposed elements for which Washington is being accused of in The Hague.

"Coercive and unilateral sanctions become a weapon that kills people.  That is why it is a crime against humanity that attacks the civilian population," she said.  Delcy Rodriguez recalled how Donald Trump's administration admits and declares its real intentions when implementing coercive and unilateral sanctions against this South American nation.

"They confessed, declared and ratified (...) there is direct causality between intention, which is the change of government, and measures and sanctions they are applying."  She also stressed that U.S. foreign policy is outside the law; it is an illegal policy, contrary to international law, contrary to national legal systems.

Regarding the progress of the lawsuit in The Hague, she pointed out that the evidence presented shows how from December 2014 to 2020, there is a critical timeline, from a legal standpoint, which has to do with all the actions taken by them to asphyxiate the country.