Cargo arrives in Venezuela with medical aid from China 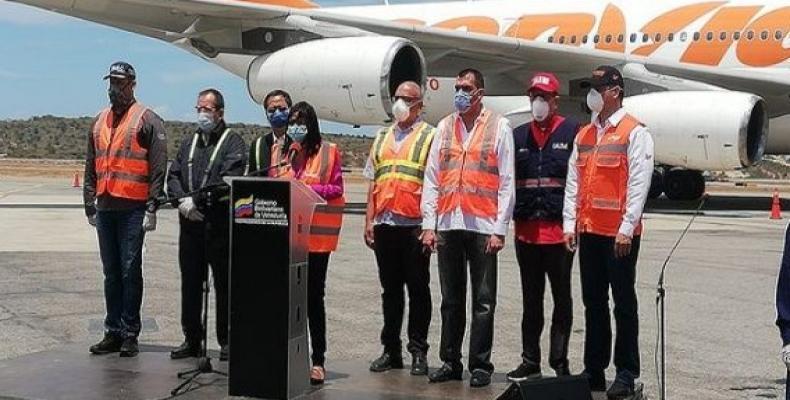 Caracas, March 19 (RHC)-- A special medicine and medical supplies shipment arrived in Venezuela from China on Thursday, March 19th, as the Asian nation continues to provide assistance to the Bolivarian Republic.

Nicolas Maduro, President of Venezuela, announced that the cargo arrived and assured it would allow thousands to be tested for possible COVID-19 cases and diagnose the positive ones.  The president explained that so far all the cases detected came from Europe and Colombia.

On his official Twitter profile, teleSUR reporter Leonel Retamal Muñoz announced the shipments arrival.  "A shipment of COVID-19 medical supplies and diagnostic kits arrived in Venezuela from the People's Republic of China.  Special suits, glasses, gloves, mask and screening tests for the care of patients with Covid-19," published Retamal in its official account.

According to the report, Venezuelan Vice President Delcy Rodriguez announced in a press conference the creation of an airlift with China next week to continue the collaboration between both countries.  Alongside the Bolivarian government representative was Li Baorong, the Chinese ambassador in Venezuela.

Cuban medical specialists also arrived on the aircraft belonging to Conviasa Airlines. The doctors will join forces with the current Cuban medical mission in the South American nation and will help fight the virus, Retamal reported.

This material support comes to Venezuela after the IMF's refusal to grant a $5 billion loan to reinforce Venezuela's health system facing the COVID-19 spreading.