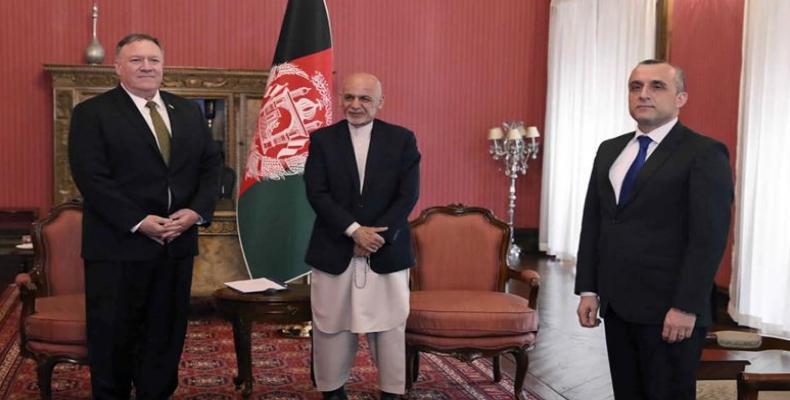 Kabul, March 23 (RHC)-- U.S. Secretary of State Mike Pompeo announced a $1 billion cut in American aid to Afghanistan after he failed to convince Afghan President Ashraf Ghani and his political foe to end a feud that has helped jeopardise a U.S.-led peace effort.

The United States also is prepared to cut another $1 billion worth of assistance in 2021 and is conducting "a review of all of our programs and projects to identify additional reductions and reconsider our pledges to future donor conferences for Afghanistan," Pompeo said in a statement.

Pompeo's statement came as he flew home from a fruitless day-long effort in Kabul to end competing claims to the presidency by Ghani and Abdullah Abdullah and win their agreement to form "an inclusive government."

The harshly worded announcement at the end of the mission he undertook despite the spreading global coronavirus pandemic underscored how badly stalled the US-led effort to end America's longest war and decades of strife in Afghanistan has become.

Pompeo also met separately with Afghan leader Abdullah Abdullah at the Sepidar Palace in Kabul on Monday, but he failed to negotiate an agreement with Abdullah's rival, Ghani [Sepidar palace via AP]
The US pays billions every year towards the Afghan budget, including the country's defence forces.

Afghanistan barely raises a quarter of the revenue it needs to run the country, giving Pompeo considerable financial leverage to force the two squabbling leaders to overcome the impasse.

On his way back to Washington, DC, Pompeo landed at a military base in Qatar for a 75-minute meeting with Taliban officials, including their top negotiator, Mullah Baradar Akhund.