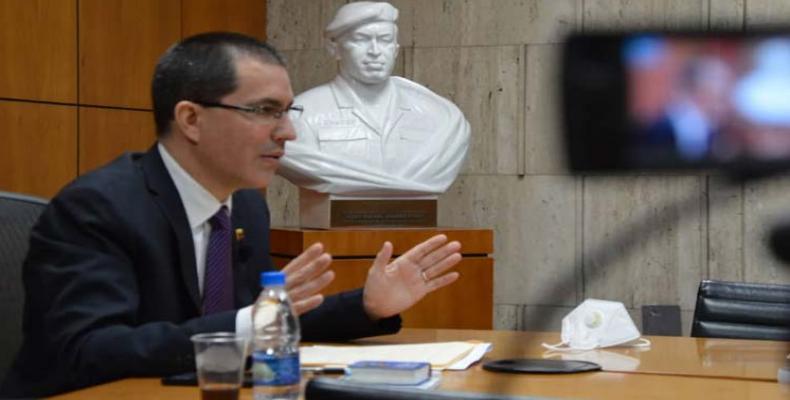 Caracas, August 19 (RHC)-- Venezuelan Foreign Minister Jorge Arreaza laid out the essence of the aggressions of the United States and its allies against the South American nation on Wednesday at the 16th Online Seminar sponsored by the International University of Communications (Lauicom).

During the virtual forum, Arreaza gave the lecture "The Imperialist Aggression against Venezuela," in which he explained the real intentions of the capitalist powers in this country and in Latin America.

"Washington's multidimensional and multiform aggression against Venezuela is aimed at breaking the morale of the people and retaking political-economic control of the country," he said.  "It is a war by sublime means in some cases, subliminal in others and direct in others,' Arreaza said during the event.

He stressed that imperialism intends to take what it wants from his country, to exploit its natural resources in order to sustain its model and control the rest of the continent from a strategic geographical position.

"The United States is the most representative version of imperialism at the moment," he stressed, "but we can also see them in Brussels, Europe and even in the south."

The head of Venezuelan diplomacy pointed out that the attacks against his country are perhaps the clearest example of imperialist aggression at this historical moment.

In his conference, Arreaza dismantled the strategy applied by the White House in the region, indicating that one of the attacks is the political one, through which they try to isolate Venezuela in international organizations and for that purpose they rely on the media campaign, where they use lies to justify their punitive actions.

To this end, he emphasized, they use the narrative of narco-government, corruption, and human rights violations, with which they seek to damage the reputation of personalities and representatives of the State.

He explained how they design a legal scaffolding through lawfare, using the laws to attack a certain target.  The characteristics of the aggression are transversal, but they are also moral because they seek to destroy the morale of Bolivarians and even the Venezuelan identity, he said.

Thousands of Internet users participated and exchanged ideas in this virtual forum sponsored by the Lauicom as part of its teaching cycle, which began in June and which, due to the pandemic, is now being developed through social networks and digital platforms.