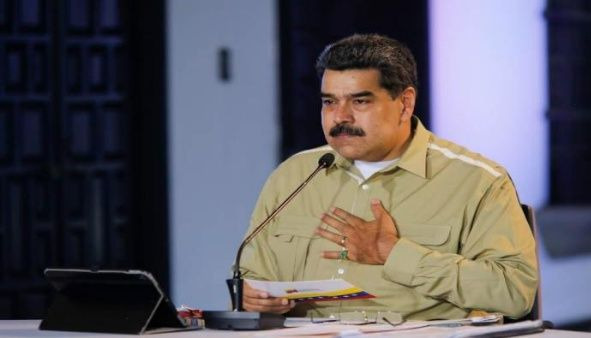 Caracas, September 12 (RHC)-- Venezuelan President Nicolas Maduro has announced the capture of an “American spy” with heavy weapons and money near two refineries in the country, which is gripped by an acute fuel shortage crisis as a result of illegal U.S.-imposed sanctions.

"Yesterday, we captured... an American spy who was spying in Falcon state on the Amuay and Cardon refineries,” Maduro said in a televised address from Caracas.

The individual, Maduro said, was a member of the U.S. Marine Corps who worked with the CIA in Iraq, and was captured with “heavy, specialized weapons and a large amount of cash” in the northwestern state.

The arrest took place after authorities had "discovered and dismantled" a "plan to cause an explosion" at El Palito refinery in Carabobo state, west of the capital.  Venezuelan authorities have stepped up security at all refineries in the Latin American country after the incidents.

Two former members of the U.S. military were detained in Venezuela in May after a group of mercenaries attempted to intrude into the northern state of La Guaira on speedboats.  The Venezuelan military foiled the attack, killing eight of the armed men and arresting several others.

Venezuela sits on the world’s largest oil reserves and its refineries can produce more than 1.3 million barrels per day (bpd) of fuel, but they are working at less than 20% of their capacity mainly due to power outages and lack of spare parts amid U.S. sanctions.

The government announced on Friday a new fuel distribution initiative and said it was planning new refining projects in the face of long lines stretching for kilometers by Venezuelans to fuel up their vehicles.

Opposition figure Juan Guido unilaterally declared himself “interim president” in January last year, followed by a U.S.-backed botched coup against the elected government.  There was also an attempt to assassinate President Maduro in a drone strike in August 2018.

Guaido’s self-proclamation and his coup attempt received backing from the U.S. administration.
Ever since, Washington has imposed several rounds of crippling sanctions against the oil-rich South American country aimed at ousting Maduro and replacing him with Guaido.

The sanctions, which include the illegal confiscation of Venezuelan assets abroad and an economic blockade, have caused suffering for millions of people in the country.