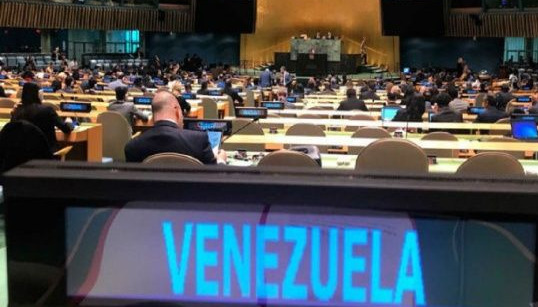 Geneva, September 16 (RHC)-- Venezuelan Foreign Minister Jorge Arreaza has rejected a report presented by the United Nations Independent International Mission on Human Rights (IIMH), stressing that it is "full of falsehoods" and lacks "any methodological rigor."

Arreaza points out that the text was elaborated "at a distance," while he qualified as "a ghost" the quoted Mission -- "directed against Venezuela and controlled by governments subordinated to Washington," which, according to the foreign minister, "illustrates the perverse practice of making politics with Human Rights and not Human Rights policies."

"Since December 2, 2019, we have affirmed that we do not recognize any politicized and inquisitorial mechanism, created for ideological purposes by countries with bad records in Human Rights, to attack Venezuela and try to damage the relationship with the Office of the High Commissioner," added the Venezuelan top diplomat.

Notwithstanding, Arreaza reiterated that Venezuela's cooperation "with the UN Human Rights Council has been generated in a coordinated and constructive manner with the Office of the High Commissioner.  The advances have been notorious and this has been recognized by Ms. Michelle Bachelet when she announced the renewal of our relationship."

For its part, a more extensive pronouncement by the Ministry of Popular Power for Foreign Affairs in Venezuela recalled that the Government is working in coordination with the Office of the High Commissioner within the framework of the Letter of Understanding signed in September 2019, in accordance with Resolution A/HRC/42/4, adopted by the Human Rights Council at its 42nd session.

"The purpose of this joint work is to constructively address human rights challenges, further strengthening the social protection system of the Venezuelan State," the statement adds.

From the Venezuelan Foreign Ministry, the "strict commitment" of the South American country "with the promotion and protection of Human Rights" was emphasized, an area of social development in which "it will work hard to depoliticize its implementation with selective purposes, with the tendentious intention of violating the independence, sovereignty and self-determination of the Venezuelan people and all the peoples of the world."