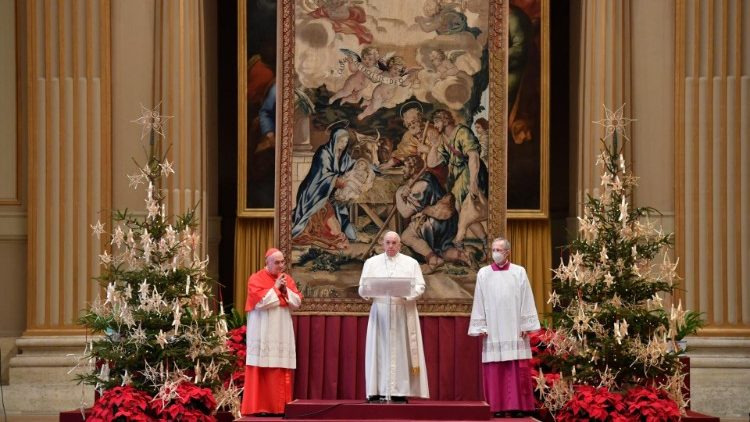 Vatican City, December 25 (RHC)-- Pope Francis has highlighted the plight of children caught up in wars, singling out victims in Syria, Yemen and Iraq in his Christmas message.  “On this day, when the word of God became a child, let us turn our gaze to the many, all too many, children worldwide, especially in Syria, Iraq and Yemen who still pay the high price of war,” he said.

“May their faces touch the consciences of all men and women of good will, so that the causes of conflicts can be addressed and courageous efforts can be made to build a future of peace,” he said.

Pope Francis also made a plea for authorities to make COVID-19 vaccines available to all, insisting that the first in line should be the most vulnerable and needy, regardless of who holds the patents for the shots.

“Vaccines for everybody, especially for the most vulnerable and needy,” who should be first in line, Francis said in off-the-cuff remarks from his prepared text, calling the development of such vaccines “light of hope” for the world.  “We can’t let closed nationalisms impede us from living as the true human family that we are,” the pope said.

Pope Francis called on the leaders of nations, businesses and international organizations to “promote cooperation and not competition, and to search for a solution for all.”

Amid a surge of coronavirus infections in Italy, Francis broke with tradition for Christmas.  Instead of delivering his “Urbi et Orbi” speech -- Latin for “to the city and to the world” -- from the central loggia of St Peter’s Square, he read it from inside a cavernous hall at the Apostolic Palace, flanked by two Christmas trees with blinking lights.

Normally, tens of thousands of people would have crowded into St Peter’s Square to receive the pope’s Christmas blessing and speech.  But Italian measures to try to rein in holiday infections allow people to leave their homes on Christmas for only urgent reasons like work, health, visits to nearby loved ones or exercise close to home.

The pandemic’s repercussions on life dominated Francis’s reflections on the past year.  “At this moment in history, marked by the ecological crisis and grave economic and social imbalances only worsened by the coronavirus pandemic, it is all the more important for us to acknowledge one another as brothers and sisters,” Francis said.

Fraternity and compassion apply to people “even though they do not belong to my family, my ethnic group or my religion”, he said.

Francis prayed that the birth of Jesus would inspire people to be “generous, supportive and helpful” to those in need, including those struggling with ”the economic effects of the pandemic and women who have suffered domestic violence during these months of lockdown.”