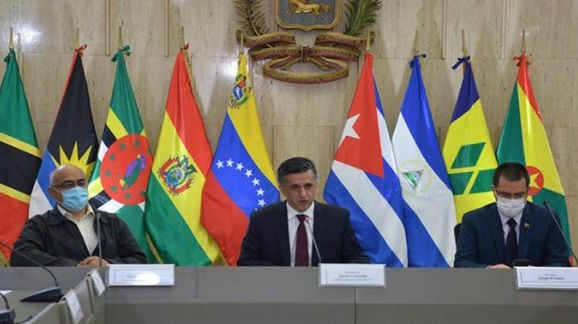 Caracas, January 19 (RHC)-- The executive secretary of the Bolivarian Alliance for the Peoples of America - People's Trade Agreement (ALBA-TCP), Sacha Llorenti, opened Tuesday's meeting of the Social Council of the bloc, aimed at coordinating efforts to guarantee massive and free access to vaccines and other medicines for the peoples of its member countries.

With the slogan "United against COVID-19" the meeting responds to the proposal of Venezuela and Cuba's presidents, Nicolás Maduro Moros, and Miguel Díaz-Canel, respectively, about the creation of a vaccine fund for ALBA-TCP countries.

Llorenti reviewed the situation of COVID-19 in the Americas and the world, emphasizing its lethality.  He further highlighted that, on average, more than 11,900 people had died every day, the equivalent of one death every 8 seconds.

The executive secretary of the bloc criticized the neoliberal system that proposes confronting the pandemic following the market rules, despite the recommendations of international institutions, particularly the World Health Organization (WHO), which have warned that only solidarity will guarantee the success of the struggle against COVID-19.

"Rich countries are stockpiling vaccines, up to nine times the number of their citizens.  Who decides where the vaccine goes?  It's the market that's deciding," says the Executive Secretary SachaLlorenti."

Llorenti said that "this scenario is particularly stark in relation to the vaccines already made available to the international community.  Llorenti emphasized that, in the face of this way of working by the countries that support neo-liberalism, examples are being raised such as those of Cuba and Venezuela, which have supported with personnel and resources numerous populations from all regions of the world.