Dominican Republic announces construction of wall on border with Haiti 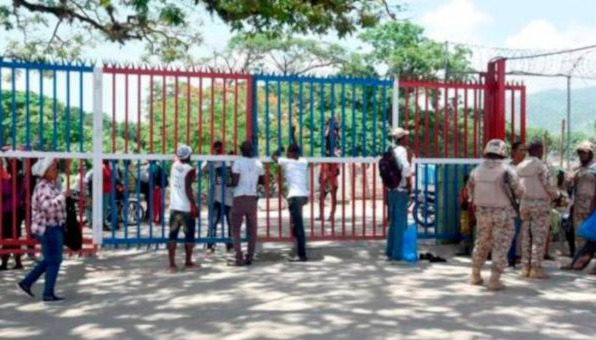 Dominican Republic announces construction of wall on border with Haiti

Santo Domingo, February 28 (RHC)-- The president of the Dominican Republic, Luis Abinader, announced the construction of a dividing fence between his country and Haiti with the purpose of "putting an end" to the problems of "illegal immigration, drug trafficking, transit of stolen vehicles."

In his first accountability speech before the National Assembly, Abinader unveiled this Saturday the new measures to reinforce security in the area, which includes a double perimeter fence in the most conflictive stretches and a single fence in the rest.

"Within two years, we want to put an end to the serious problems of illegal immigration, drug trafficking and transit of stolen vehicles that we have suffered for years and achieve the protection of our territorial integrity that we have been seeking since our independence," he said.

The announcement that in the middle of this year the construction of a dividing fence on the border between the Dominican Republic and Haiti will begin reopens the old debate that has existed in both nations as to whether or not this measure is appropriate or not.

The possibility and feasibility of building a fence on the Dominican-Haitian border has been for decades an issue that has generated positions for and against and, in recent years, has prompted reactions even from the current president of Haiti, Jovenel Moïse.

In December 2019, while discussions were being generated by the construction of the wall on the U.S.-Mexico border being carried out by then U.S. President Donald Trump, President Moïse was asked about an eventual erection of a wall.

The spokesman for the Dominican Liberation Party (PLD) in the Senate, Aris Yvan Lorenzo, legislator for Elías Piña, says that the problem of illegal aliens and merchandise traffic on the border can be solved by creating better living conditions for those who live in the area and not necessarily with a wall.