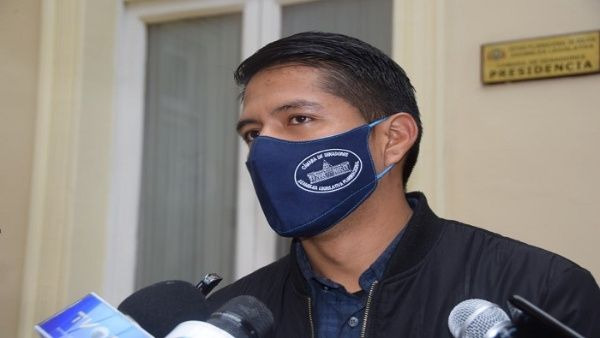 Andrónico Rodríguez's statements were made after learning of a letter written by the former Bolivian president | Photo: EFE

La Paz, March 24 (RHC)-- The president of the Bolivian Sente, Andrónico Rodríguez Ledezma, said Tuesday in statements to the press that the human rights of former de facto president Jeanine Áñez and her ministers have not been violated.

"She is claiming that the rule of law has been lost, which is totally false.  From the Assembly, we are asking for due process, that all rights are respected, but we cannot go to the extreme of asking for her to have privileges in jail," stressed the Bolivian politician.

Andrónico Rodríguez's statements were made after a letter written by the former coup president was made public this Tuesday by the media.  In the letter, Áñez denounced the alleged violation of her rights and an alleged attack on her health.

"Due process is being respected (for Añez), everything she did not do.  They detained more than 1,500 people throughout the national territory," said the president of the upper house of Bolivia's Legislative Assembly.

Bolivian senator Leonardo Loza described the letter presented by Jeanine Añez as "a political letter, it has nothing to do with the health issue.  They have been talking about political persecution to avoid being held accountable before the Bolivian justice system.  This type of discourse is totally political and the international community must be informed," declared the Bolivian politician.