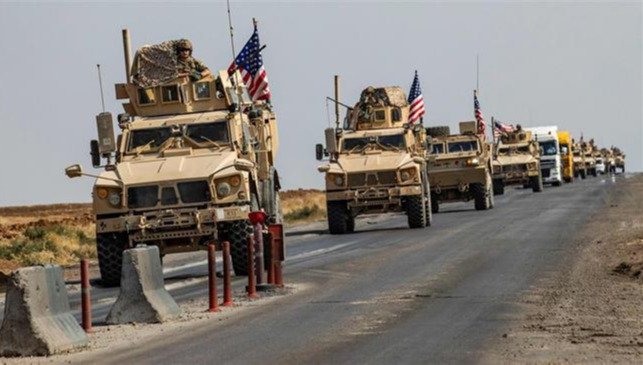 A convoy of U.S. military vehicles drives along a road in the countryside of Syria’s northeastern city of Qamishli, Hasakah province. (Photo: AFP)

The development took place a few days after 38 US military trucks entered northern Iraq from Syria as they were carrying wheat crops.

Back on March 26, local sources in Syria’s northeastern town of al-Malikiyah reported that 18 US military vehicles, loaded with wheat crops, had rumbled through Semalka border crossing, and headed toward the Iraqi territory.

Russia’s deputy foreign minister says the U.S. is smuggling oil and grain from Syria while people in the war-torn country are suffering from acute shortage of basic products.  This comes as US forces also continue to smuggle crude oil from Hasakah to Iraq.

The U.S. military has stationed forces and equipment in northeastern Syria, with the Pentagon claiming that the troops deployment are aimed at preventing the oilfields in the area from falling into the hands of Daesh terrorists.

Damascus, however, says the deployment is meant to plunder the country's resources.   Syrian Minister of Petroleum and Mineral Resources Bassam Tomeh told state-run and Arabic-language al-Ikhbariyah Syria television news network on March 18th that the U.S. and its allied Takfiri terrorist groups are looting oil reserves in the war-stricken Arab country, revealing that Washington controls 90 percent of crude reserves in oil-rich northeastern Syria.

“Americans and their allies are targeting the Syrian oil wealth and its tankers just like pirates,” the Syrian oil minister said.  He noted that the cost of direct and indirect damage to the Syrian oil sector stands at more than $92 billion.

On July 30 and during his testimony to the Senate Foreign Relations Committee, Pompeo confirmed for the first time that an American oil company would begin work in northeastern Syria, which is controlled by militants from the so-called Syrian Democratic Forces (SDF).

The Syrian government strongly condemned the agreement, saying that the deal was struck to plunder the country's natural resources, including oil and gas, under the sponsorship and support of the administration of former U.S. President Donald Trump.