Indepaz warns about progressive increase of displaced people in Colombia 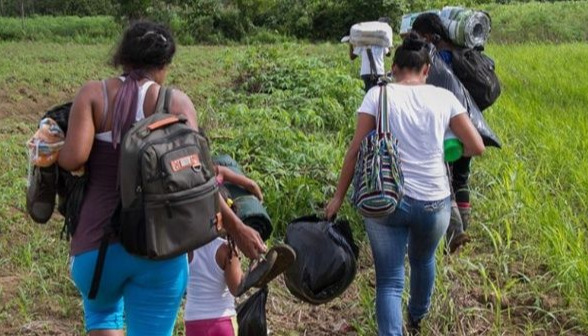 Forced displacement has become a problem for the implementation of the 2016 Peace Accords. | Photo: Twitter: Indepaz​

Bogota, April 9 (RHC)--According to the Institute for Peace Studies (Indepaz), 15,000 people in Colombia have been displaced in 65 mass events over the first three months of 2021.  The figure represents an increase in the trend when compared to the total number of displace in 2020.

The Institute, which monitors compliance with the 2016 Peace Accords, warned that if those numbers continue, the country could have by the end of the year more than 150 mass events and more than 60,000 displaced.

Camilo González, director of the Institute said: "It would be a disaster because we would be returning to the figures that were presented before the Peace Accords, which were more or less 155 events per year.  The situation is very critical and if we continue as we are going this year displacement will skyrocket."

Meanwhile, the UN Office for Humanitarian Affairs (OCHA) warned in a report on Tuesday that 2,185 people have been victims of massive forced displacement due to clashes between illegal armed groups in rural Argelia (Cauca).

They also denounced the violation of International Humanitarian Law because they were forced to withdraw medical personnel when one of the illegal groups entered a medical center, threatened the health personnel and took out a man who had been wounded in the clashes to execute him and also took over the clinic for several hours.