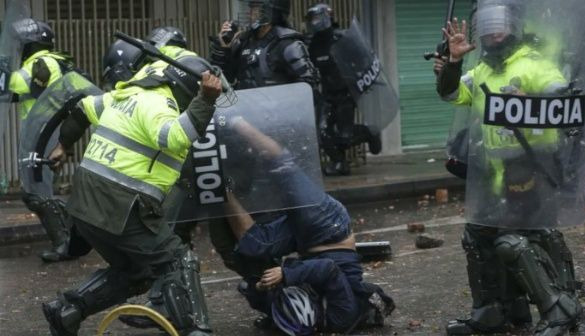 Bogota, June 11 (RHC)-- Demonstrators participating in the National Strike in Colombia, which has been going on since April 28th, were repressed Thursday night by the security forces, with a preliminary balance of one dead and a dozen injured.

The episodes of violence occurred, among other areas, in the country's capital, Bogota, and in the southwestern city of Cali, where one person was killed by a shot from a high caliber weapon.

Twitter user Carlos Hainsfurth (@CarlosHainsfurt) reported that at 20:30 local time (01:30 GMT Friday), Jhon Arenas, who was in his car near the traffic circle in the Cali neighborhood of Siloé, "was hit by a projectile fired by the police that caused his death.  (The) blockade at (the) traffic circle had already been lifted."

in the Chicalá neighborhood, located in the south of Bogotá, on Thursday night the public forces repressed the demonstrators located at the resistance point on Aguante street.

The independent media Colombia Informa reported, in a first balance, seven people injured, five of them in the head.  In addition, there were several more people affected by tear gas thrown by the police.

Today, Friday, on the 45th day of the National Strike, artistic demonstrations are taking place in front of the Prosecutor's Office in the city of Bogota.

The Colombia Informa platform indicated that a new demonstration of students was called at the entrance of the National University of Bogota, to mobilize towards the Prosecutor's Office, in another day of the strike.

Meanwhile, the victims are awaiting a pronouncement from the mission of the international human rights organization (HR) which investigated in situ the denunciations of violations to individual guarantees, in the framework of the social protests taking place in the South American country.

Various human rights organizations have reported that since the beginning of the demonstrations, more than 70 murders and 3,700 cases of violence by the security forces have been reported throughout Colombia.