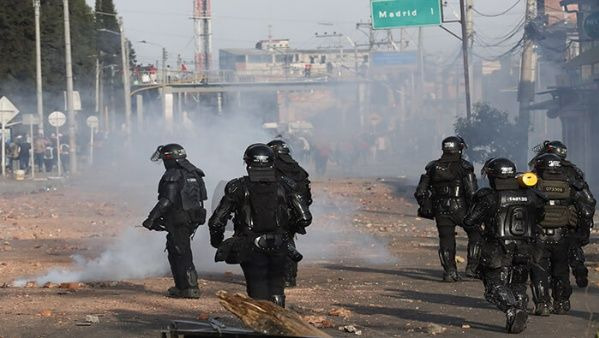 In the afternoon the first incidents were reported in the center of the city and other areas of the capital of the department of Antioquia. | Photo: EFE

Bogota, June 17 (RHC)-- The Colombian city of Medellin witnessed on Wednesday the repression of the Mobile Anti-Riot Squad (ESMAD) against a new social mobilization against President Ivan Duque.

Through social networks, witnesses to the repression denounced that the ESMAD fores attacked members of Atención Prehospitalaria para Medellín (APH), with stun bombs and gas, and also assaulted a freelance photographer.

After several days of a suspension to demonstrations, this Wednesday the streets of the Colombian city were again filled with protesters, who came out to protest and say they do not feel represented by the Strike Committee.

In the afternoon, the first incidents were reported in the center of the city and other areas of the capital of the department of Antioquia, which lasted until the evening hours.

The Personero of Medellín, William Yeffer Vivas, denounced intimidations by the ESMAD against members of the Personería who were verifying that the tear gas they had was not expired.

So far, the authorities have not commented on the repression by the ESMAD forces.

Acts of repression were also reported in Bogota, the Colombian capital, where members of the ESMAD and the National Police evicted people protesting at the Portal de las Americas, recently named Portal de la Resistencia (Portal of Resistance).

In the city of Bucaramanga, citizens denounced the repression and presence of ESMAD in residential sectors of the country.

According to the Institute of Studies for Development and Peace (Indepaz) denounced on Tuesday that 70 people have been killed since the beginning of the social protests, which have been subject to brutal violence by the public forces.