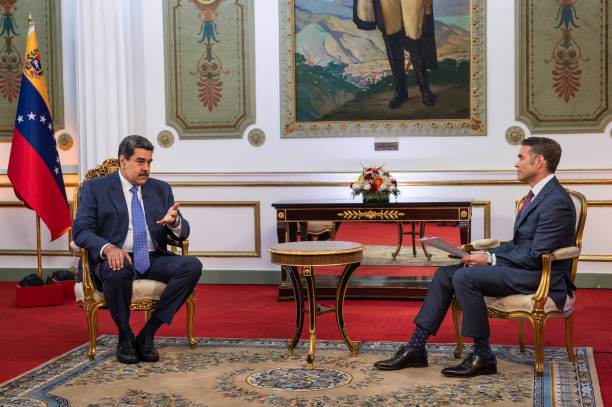 Caracas, June 21 (RHC)-- Venezuelan President Nicolás Maduro, in an exclusive interview with Bloomberg News, has denounced that the South American country suffers an economic massacre carried out from the United States, which violates the human rights of Venezuelans.

"We faced four years of the Trump administration of aggressions and cruel sanctions thatgreatly damaged the Venezuelan economy.  Trump left an irrational policy against Venezuela that has been questioned by human rights organizations.  More than 80 percent of the Venezuelan population rejects those sanctions," said Nicolas Maduro.

Bloomberg journalist Erik Schatzker sat down with the Venezuelan president in Caracas for an extensive interview, lasting nearly an hour and half.  During the interview, the Venezuelan leader asserted that despite the illegal blockade, the country is not isolated and strengthens its relations with its allies in the world.   "The world is more than just the West, the 21st century is multipolar.  we aspire to rebuild relations with the U.S., because our relations with intellectuals, social movements in the United States are good," he added.

The Venezuelan president urged his counterpart in the United States -- Joe Biden -- to stop demonizing the Bolivarian process.   "Hopefully we can find ways of respect and mutual benefit that will allow us to nomalize relations between both countries."

"For the moment there has not been a positive sign of rapprochement, the only different thing that could be heard are that the spokespersons of the White House and the State Department are seeking a dialogue in the country, but it is very timid because the sanctions are still intact," said Nicolas Maduro in his interview with Bloomberg News.

Regarding possible rapprochements with former President Donald Trump, Maduro said that he was close to starting a dialogue, but advisors such as Bolton exerted unimaginable pressure.  "Then Foreign Minister Delcy Rodriguez was in Washington and met with people collaborating with Trump, but Trump's method prevailed.  I was about to meet in 2018 with Trump, but Bolton's pressures prevented the meeting," he noted.

"In 2019 and at the end of his administration in 2020, there were contacts in Mexico with the then Minister of Communications Jorge Rodríguez.  They claimed that if Trump won the elections he would change the policy towards Venezuela.  He was bored with Juan Guaidó," confirmed the head of state.

"In Venezuela, 26 elections have been held in 20 years.  Out of those 26 we have won 24 and there has been international oversight and in many cases even from the Organization of American States (OAS).  The former U.S. president, Jimmy Carter, asserted that Venezuela's electoral system is the most transparent in the world," said President Maduro.

The Venezuelan leader emphasized that after the installation of the new National Assembly in the country, a process of pacification and understanding with all the political sectors has begun.  "There are negotiations with all the opposition to extend the electoral guarantees with a view to the mega-elections of November 21 (...)  A good National Electoral Council was elected, and they have started off on the right foot to start the mega-elections."

"The electoral guarantees to propitiate transparent and reliable mega-elections will be expanded according to the political negotiation that is being carried out with all political organizations."

Regarding the international missions to monitor the national elections, the President reiterated that the rectors of the CNE are the ones who send the respective invitations, "anyone who wants to come will be welcome."

"Is it new that the CIA has been conspiring against countries in Latin America?  They have done it in Cuba, Allende's Chile, against Comandante Chávez himself," explained President Maduro.

Regarding this issue, the Head of State denounced that since the triumph of the Bolivarian Revolution, a brutal stigmatization campaign has been carried out.  "The powerful of the world and the elites of Latin America are not interested in a process that consolidates and is an alternative to neoliberalism."

"Venezuela and the world have the right to commercial freedom.  There cannot be a country that by dominating the currency and the banking system, imposes its government on another.  If this is established, it would be the end of the United Nations and International Law.  The United States must recognize that International Law exists," stated Venezuelan President Nicolas Maduro.