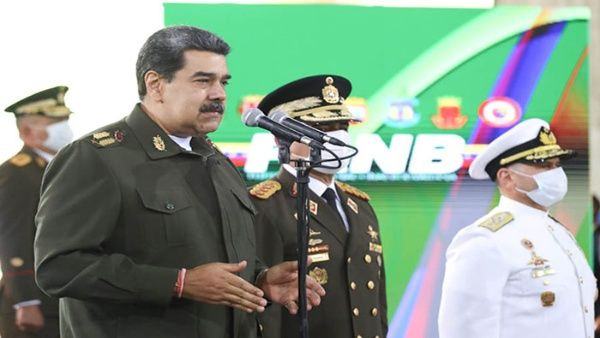 "Of the criminals killed, ten do not have Venezuelan fingerprint registration, which makes us presume that they are part of the Colombian paramilitaries that were in the area," said the president. | Photo: @PresidencialVen

The head of state asserted that these attempts have been successfully controlled by the Bolivarian National Armed Forces (FANB).  "We have just obtained a great success in the fight against criminal and terrorist gangs, formed, financed and armed by Colombian paramilitarism," he said.

Referring to the events in the areas of Caracas known as La Cota 905, El Paraíso, El Valle and El Cementerio, the President denounced that during the operation three paramilitaries were captured and declared that more than 20 Colombian citizens belonging to criminal gangs had been in the area for months.

"At this hour, the security forces of the State are searching for the leaders of the gang and the remaining paramilitaries, who are fleeing.  They will find them to guarantee the victory of peace," said President Maduro.

"Of the criminals killed, ten do not have Venezuelan fingerprint registration, which makes us presume that they are part of the Colombian paramilitaries who were in the area," said the president.

The President's statement was made in the framework of the act of transfer of command of the Strategic Operational Center of the FANB (Ceofanb).  "Venezuela's powerful civic-military-police union is the backbone of the Bolivarian Revolution of the 21st century, whose objective is the peace of the Republic," said the Venezuelan president.

Regarding the participation of Colombian mercenaries in destabilization plans, President Maduro pointed out that the issue is an old one, emphasizing: "The greatest threat in Latin America is those who govern Colombia."

"The Colombian Government must have known about the preparation of that group of mercenaries to commit that crime in Haiti.  Duque knew and has to recognize it (...) In Colombia governs a narco-terrorist mafia, they export cocaine, they threaten the borders with Venezuela because they want to pass the drug through our territory and now they are, a machine for exporting mercenaries and murderers to the world."